Odessa, TX – After trailing 7-1 through five innings, Permian made a valiant effort at responding but came up short in the 10-7 loss to Abilene High.  Mojo’s six-run inning in the sixth wasn’t enough to overpower the Lady Eagles at the Ratliff Softball Complex on Thursday. 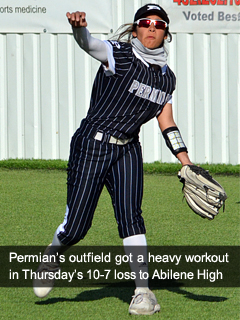 While the Lady Panthers still absorbed a district loss, they didn’t fold up and quit after falling behind by six runs in the fifth inning, and then trailing by eight going into the bottom of the sixth frame.  Mojo showed they had a little mettle.  Answering with the six runs in the bottom of the sixth frame was evidence of that.  Permian’s softball team is starting to play at a higher level.

The Lady Eagles and Panthers battled through a quiet first two innings.  Strong pitching and a worthy defensive glove limited a total of two batters to get on base.  Both came courtesy of drawing walks.  Abilene High broke the deadlock in the top of the third inning.  Two base hits, an RBI double, and an inconsistent strike zone led to the game’s first three runs.

Permian collected its first base hit and base runner in the bottom of the third.  Mackenzei Bernal led off with a hard hit single to centerfield.  Nyssa Dunn also got aboard with a walk, but both were left stranded for Abilene to lead 3-0 after three complete innings.

The Lady Eagles extended their lead to 4-0 in the fourth stanza.  A lead-off double to left field would green light another Abilene High run when Permian committed an infield error. For the third time in the contest, Mojo’s at-bat consisted of three batters getting retired in order.  It would become more bleak for the hosting Black Cats in the fifth inning.  Abilene put together a series of three consecutive doubles to extend the deficit to 7-0, but the Lady Panthers showed some life in the bottom half.

Madison Garcia led off with a two-bagger to centerfield.  Bernal followed with a base tap to right field.  The fans and players on the home side of the field could sense a turning of the tide.  With one out, Arianna Ybarra hit a crisp shot to deep short to plate Garcia.  A ground out and called third strike left Bernal stranded in scoring position.

A pair of walks and fielding errors was all the Lady Eagles needed to score two runs and push their tally to an eight-run difference.  This time, the Panthers had a response.  Makayla Sanchez collected a free trip to first with one out.  A flyball to shallow right field was nabbed, leaving one aboard and now two outs in the inning.  Staying calm and collected, Emma Chavez belted a rocket over the centerfield fence for a two-run homer.

The damage seemed to unsettle the Abilene pitcher, as she dished out two walks and gave up another base hit to Bernal.  The senior third baseman went three-for-four for the afternoon.  Mojo was on the move and racked up six runs in the inning, courtesy of two more walks and a pair of fielding errors.  Permian had closed the gap and was now within striking distance, trailing 9-7 after six complete.

Unfortunately, the Lady Panthers were unable to erase the two-run margin.  The Lady Eagles added an RBI double in the top of the seventh frame.  Permian could only send four batters to the plate in the last at-bat to come up short in the 10-7 loss.  On a brighter note, there were several positives the team should be able to build on.  If Mojo can put together full games the way they finished this one, the playoffs can very much remain in the picture.

The Lady Panthers will enjoy the Easter break before resuming action on Friday, April 9 against Frenship in a road trip to Wolfforth.  Mojo will host Odessa High in the annual crosstown affair on the following day.