Odessa, TX – The Permian soccer teams were unable to sweep Midland High in the Friday district showdown at Ratliff Stadium.  The Bulldogs rallied back to tie the Panthers in the afternoon game. while the Mojo girls scored three unanswered goals to remain unbeaten in the night cap. 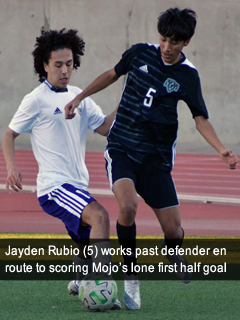 In a back-and-forth affair, the boys spent over half of the opening period trading possessions but finding it difficult to penetrate into the opposing interior. Permian had a couple of chances midway in the half, but a pair of offsides calls snuffed out the threats.  That changed at the 18:26 mark when Jayden Rubio took a pass from Cristian Acevedo and buried it into the net for the 1-0 lead.

The Panthers spent most of the remaining eight minutes in the half on defense, but did a good job of keeping the Bulldogs off the board.  The one goal lead would hold up to end the first half.

In the second half, Permian again found chances to collect a goal but sailed a shot from 25 yards out and had another attempt deflected. Still down by a goal, Midland’s Alexander Marquez found the back of the net with 1:24 remaining. Failing to clear the ball, the Mojo miscue resulted in a knotted game at 1-1. That’s how the match would end, with each team added a point to their district tally.

Following the guys, the ladies took the field for battle.  On polar opposite ends, undefeated Mojo hosted a winless Lady Bulldog team.  Midland High opened with a goal 12 minutes in, but Permian answered with a score of its own to even the first half.  A pair of goals in the second half lifted the Lady Panthers to a 3-1 district win.

Melanie Sanchez put a deflection into the back of the net to make it 1-0.  That lead lasted less than 30 seconds.  Nyxalee Munoz took advantage of a miscue and delivered the tying goal to make it 1-1. The tally would remain deadlocked going into halftime.

Munoz was back for more and connected on the next opportunity to give the Lady Panthers the lead on a penalty kick to make it 2-1 at 27:54.  A third goal, this one by Kelsie Fuentez, extended the Permian lead with 14:06 remaining in the game.  Mojo preserved the two-goal deficit to collect the two district points and remain unbeaten.

Both Mojo boys and girls junior varsity teams came up short against the JV Bulldogs.