Odessa, TX – The Lady Panthers soccer team erupted in the second half to dispose of crosstown rival Odessa High 4-0 on Tuesday at Ratliff Stadium.  With the victory, Permian remains unbeaten in district (2-0-1) and for the season (6-0-2). 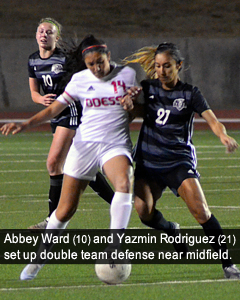 Mojo and OHS remained deadlocked in a scoreless affair through much of the first half.  Nyxalee Munoz was able to break the silence in the 29th minute to give the Lady Panthers a 1-0 edge. The Lady Bronchos challenged early but goalkeeper Maria Vasquez denied multiple shot attempts off of a breakaway and again on a rebound effort. The goal lead would carry into the intermission.

Munoz added an insurance goal in the 52nd minute to give Permian a 2-0 advantage.  The Lady Black Cats were not satisfied and came back for more.  Kelsie Fuentez joined in with another pair of goals.  The third score came off of a corner kick, and Fuentez hammered in the final goal to push the lead to 4-0 with less than five minutes to play.

In the earlier contest, the Permian boys drew first blood and looked on course to seal the deal.  Adrian Martinez found the back of the net when a free kick ricocheted off of the crossbar.  The put-back shot at the 11th minute gave the Panthers a 1-0 lead.  The Bronchos managed to answer with a goal of their own to send the teams to the locker rooms knotted at 1-1.

While Permian had a couple of kicks drift wide in the second half, Odessa High got the goal needed in the 51st minute on a header that slid just inside the post. The Panthers threatened on two different series in the final ten minutes, but were unable to even the score or regain the lead. The varsity guys came up a goal short in the 2-1 loss. The boys junior varsity also ended on the wrong end of a 4-0 decision.