Odessa, TX – The past six seasons the Mojo basketball program has been under the guidance and leadership of head coach Tim Thomas. As fate would have it, nothing lasts forever.  He has taken a head coaching position at 5A Fort Worth Southwest HS and will be leaving the Panthers with plenty of gravy still on the table for the next guy to enjoy. 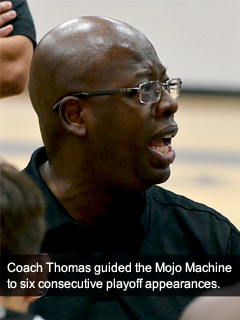 Coach Thomas came to Permian in 2015. In his time at Permian, he has led the Panthers to six straight playoff appearances and three District Champion titles. In 2017-18, Mojo made it to the Region Semifinals for the first time in 25 years of the basketball program’s history. His guidance in 2017-18 also resulted in the Panthers recording a  school best 31-4 mark. That record was broken the following season, as the 2018-19 team finished 32-4, which stands as best record and most wins for a single season in program history.

The 2019-20 season resulted in the Mojo making back-to-back-to-back Region I-6A tournament appearances and resulted in a regional championship final game. This past season, the Mojo Machine rolled to an impressive 10-2 district record (19-6 overall) while reaching the Area Round of the Texas Class 6A state playoffs.  Permian has earned a reputation of producing well-oiled teams, where a stingy defense has become a staple of the Panthers.

Prior to Permian, Thomas coached at Fort Bend Hightower in 2014 and led them back to the playoffs for the first time in four years. He has had coaching stints at Cedar Hill (four years – four playoff runs, and a Regional Championship appearance), Temple HS (two years and made it to the Regional Championship), Lubbock Estacado (six years – five District titles, four Regionals, and a State tournament appearance), and Palo Duro (three years and scoring Amarillo’s first ever #1 state ranking).

Thomas collected his 500th win as a head coach in 2020.  He has 34 years of coaching experience, which includes 22 years as a head coach, 10 years as a college assistant, and two seasons at Wayland Baptist University. He also served as a public-school administrator for two years.  Thomas got his Undergraduate degree at Wayland Baptist.  He earned his Masters of Education at Texas Tech.

The Permian basketball program has certainly reaped the benefits from the teachings of Coach Thomas and Danny Ray Wright (Thomas’ predecessor) in comparison to the level of play in years past. With this unfortunate twist of fate, Thomas will be sorely missed.

Heck of a coach, mentor, and leader of our student-athletes of Permian High School. The Fort Worth Southwest basketball program has, without a doubt, landed a good one!  On a personal note, I will miss the post-game conversations.  They were always very educational… and memorable.