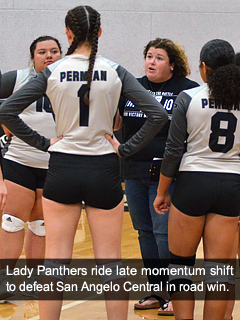 Just when it started to look like a win was slipping away, tenacity and resilience lifted the Lady Panthers to a thrilling road victory.  Down 16-6 in the fourth set, Permian combined a seven-point run and then a three-point run to knot to match and go on to claim a pivotal 27-25 win.

Students from both school junior varsity teams made their presence known in the stands and provided extra fuel to an already exciting atmosphere.  The two well-coached teams gave those in attendance their money’s worth with a high-octane, emotion-filled show.

In the first set, Nyxalee Munoz got Permian off to a quick 4-1 lead.  San Angelo Central battled back to keep the contest deadlocked at 7-7, as an exchange of points pushed that to 14-14.  A big league block by Jade Workman allowed the Lady Panthers to regain the lead, but the Lady Cats came right back to tie it 23-23.  Central took advantage of a Mojo error to squeak out a 26-24 win.

The two teams stayed even in the second set until the Lady Panthers opened a 15-12 slight edge.  Denali Cardenas returned two perfectly placed digs to green light the Permian effort to march forward and take a 25-18 win to even the series at a set each.  The clash of near evenly matched teams continued in the third set.  At one point, Mojo went up 21-17, but two Central multi-point runs left the set tied 25-25 at match point.  The Lady Cats again gained the advantage with a 28-26 win to go up 2-1.

San Angelo got the Lady Panthers frustrated by reeling off seven consecutive points to open the fourth set.  Central increased that margin to 14-3 and 16-6 before Mojo was able to catch its second wind and refocus its energy.  The start of the Permian comeback began.  Chipping away at the deficit, the visiting Panthers fought back and got to within two points before eventually knotting the set at 20-20.  Having the mettle to erase a 10-point difference, Mojo rode that momentum to the end and came out on top 27-25 to even the series at 2-2.

With momentum squarely on their side, the Lady Panthers dominated the fifth set with a seven-point and four-point run to take a lopsided 11-1 lead.  San Angelo wouldn’t get a chance to return the comeback favor as Permian poured it on to claim a 15-6 win to take a 3-2 match victory over Central.  Workman finished the evening with 22 assists, 20 digs, 17 kills, and three aces.  Munoz followed that with 23 digs, 15 kills, and an impressive six aces.  Cardenas was credited with 26 assists, 15 digs, and four pivotal kills.

It was a great team effort and victory by all wearing Black-and-White, including the coaching staff and junior varsity support.  The Lady Panthers (2-3) will continue the week’s task with a road trip to Wolfforth on Friday for a District 2-6A battle against Frenship (4-1).  The Lady Tigers were off today.  Can you feel the MOJOmentum building?