Wolfforth, TX – Despite the constant spikes from Frenship’s heavy hitters, the Lady Panthers volleyball team stood tall all three sets before falling 25-17, 25-21, 27-25 in the Tiger Pit on Friday afternoon. 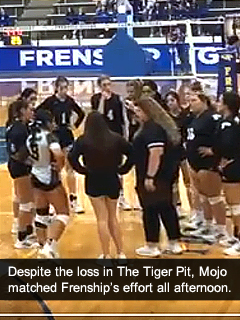 Coming off of a taxing but convincing road win against San Angelo Central, Permian entered the District 2-6A contest trying to pick up the second road win of the week.

Almost immediately, Permian faced some vicious spiked shots from the Lady Tiger front line.  Remaining vigilant, the Lady Panthers refused to let Frenship get more than three points ahead through the first half of the opening set.  The Lady Tigers went on two four-point runs to gain a 19-13 and 24-15 advantage.  Mojo fell 25-17 in the first set.

In the second set, both teams exchanged jabs but failed to dish out a knock out punch to gain control.  Frenship led 5-3 before Workman served up four consecutive points to take a 7-5 Mojo lead.  The Lady Tigers fought back to even the match, but Cruz led another four-point run to give Permian the 10-8 edge.  Both teams stayed within a point of each other with five lead changes from 12-12 to 20-20.  The Lady Panthers went back up 21-20, but Frenship closed the set by capitalizing on the next five serves for a 25-21 win.

The third set produced another nail-biter.  Permian pulled ahead of Frenship 10-6 after Cruz led a four-point Mojo surge.  The two teams would again become deadlocked at 12-12, and that would continue until the Lady Panthers went ahead 20-17.  The Lady Tigers answered with a four-point run to take a 21-20 lead.  Knotted at 21-21, another trade of points left the set tied 25-25 at match point.  Two extended volleys went Frenship’s way for the 27-25 conclusion of the set and match.

Permian lost on the scoreboard, but won by earning the respect of those that watched the three very contested sets.  The Lady Panthers will be off next Tuesday and then start the second round of the District 2-6A slate of games.  Mojo will host crosstown rival Odessa High at the Permian Fieldhouse next Friday at 5:00 p.m.