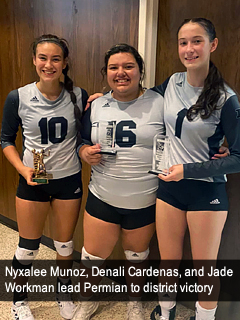 Simply living up to the expectations of an annual crosstown showdown between Permian and Odessa High, the two teams put on a show for those in attendance to admire.  Nyxalee Munoz, Jade Workman, and Denali Cardenas led the visiting Lady Panthers to victory.  Munoz finished the night with 11 kills, 10 digs, and an ace, while Workman turned in 11 kills, 26 assists, and five digs.  Cardenas recorded 23 assists and three aces.  Anahi Orona stepped up her game and added 10 kills and 11 digs.

Odessa High jumped out with a quick five points in the first set before Permian could get things going.  After settling in, Mojo went on a seven-point run to equalize the OHS assault and take a lead of its own.  The Lady Bronchos evened the set before a flurry of exchanges contributed to four lead changes.  The two teams would continue to battle to a 24-24 deadlock before the Lady Panthers would gain the advantage for a 26-24 first set victory.

In the second set, the first 13 serves were an exchange of points before OHS gained a 7-6 lead. The Lady Bronchos added a three-point run, but the Lady Panthers responded with three of their own to pull within a point at 9-10.  Odessa High fired back with three more.  Again, Permian was able to respond to close the deficit to 11-13. Mojo would take the lead on four consecutive points to make it 15-13. The set would remain within a point of each other until the match was knotted at 22-22.  An OHS surge would pull out a 22-25 second set win.

Permian went on a seven-point run in the third set to sit on a 18-10 advantage.  Odessa High narrowed the difference to 23-17, but Mojo was able to close out the set 25-17 and lead two sets to one.  The fourth set would go the Lady Bronchos way, which included a nine-point OHS run to even the contest at two sets each.

The back-and-forth affair came to a climax in the final tiebreaker set.  Three lead changes later, Permian clung to a 11-6 lead.  OHS mounted one final push to narrow the gap to 13-10.  From there, Mojo put the game on ice to claim a 15-10 victory.

With the win, Permian is 1-0 in district and 24-8 for the season.  All four of the Mojo volleyball teams beat OHS. The junior varsity collected a 30-29, 25-20 decision, while JV White and JV Black picked up wins in the gym across the street.

The Lady Panthers will travel to Midland Legacy (2-0, 20-10) on Friday for a District 2-6A clash of unbeatens.  Midland High will be at Frenship, while San Angelo Central plays at Abilene High.