Midland, TX – The Lady Panthers gave Midland Legacy a run for their money in Friday’s road loss.  The Lady Rebels won in three sets (25-16, 25-20, 25-16) to hand Permian its first district loss of the season. 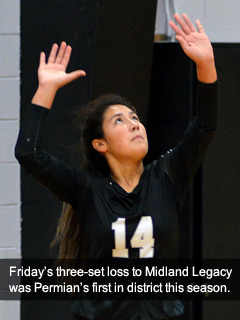 Jade Workman made herself a force for Legacy to have to contend with.  The 5-11 sophomore led Mojo in kills with eight.  She also recorded seven digs, three assists, and a block.  Denali Cardenas led the visiting Lady Panthers in assists with 10.  She also produced five digs.  Nyxalee Munoz finished the evening with eight digs, two kills, and an ace.

It would take two Legacy runs in the first set for the Lady Rebels to claim a 25-16 set.  With Workman serving, Permian was able to build a 7-4 advantage.  Legacy found a way to knot the set at 7-7.  After the Lady Panthers established 10-7 lead, the hosts went on an 8-point run.  Legacy went up 22-14 before capping off the effort 25-16.

Mojo looked on its way to evening the series in the second set.  Legacy opened with the first three points, but Permian answered.  The two teams exchanged points until the Lady Rebels went on a five-point run late to take the 25-20 decision.

The Lady Panthers stayed competitive in the final set.  A couple of errors led to Legacy going on a 6-point and 5-point run to have Permian on its heels.  Emily Short came up with two key blocks, and Anyssa Cruz donated a couple of digs that were college quality.  In the end, the Lady Rebels came up with plays when they needed them to preserve momentum on their side of the net.

Tough loss for the Lady Panthers as they proved to be worthy competitors against Legacy (3-0), the district’s only remaining undefeated team.  The two are slated to play again on October 12, but will be in the Mojo gym.  Permian (1-1) will be back at home next Tuesday as host to Midland High (1-2) in the PHS Fieldhouse.  Jr Varsity begins at 5:00 p.m. and the Varsity will follow at 6:00 p.m.