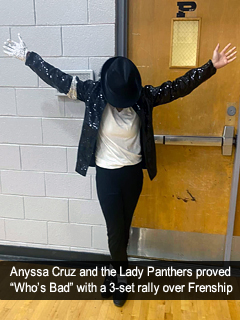 The victory provided a few milestones to the 2021 season. First, the Lady Panthers finish district with a .500 mark at 6-6. Secondly, Permian stakes claim to being the only 2-6A team besides undefeated Midland Legacy to hand the Lady Tigers a loss in district play. It was also Senior day and a special occasion for Denali Cardenas, Anyssa Cruz, Nyxalee Munoz, and Riley Nichols.  And with the playoffs coming, there’s still room for more Mojo milestones.

Munoz led the Lady Panthers with 25 digs and 14 kills, while Jade Workman recorded 16 digs and 13 kills.  Cardenas donated an impressive 22 assists and three aces, and Munoz added two more aces.  Cruz made her defensive stand with 12 digs, followed by Iliana Garcia with 10.

The Lady Panthers got off to a sluggish start, and the Lady Tigers took full advantage by opening a 10-5 deficit. The Frenship lead would extend to nine points at 17-8. After Permian fought back to trail by five, the visitors would push their lead to 23-14. Two serves later, Frenship took the first set 25-14.  The second set would repeat the first with the Lady Tigers winning 25-15 to take a two-set advantage.

In the third set, Mojo played at a completely different level and intensity.  Munoz sparked the first Permian surge, serving up three consecutive points for a 5-2 lead.  After an exchange of volleys, the Lady Panthers sat on a 15-10 edge.  Frenship cut the difference to two points before going on a four-point run to take a 21-20 lead.  Cianna Harris led a three-point Mojo response and Nichols closed the deal with a big league block for a 25-21 Permian win.

With their backs still to the wall, the Lady Panthers rode the momentum of the third set into the fourth.  Five lead changes and a series of extended volleys finally leaned in Permian’s favor.  A pair of key returns by Anahi Orona afforded PHS to elevate the score to 13-11.  Cardenas led a five-point flurry that began with an ace.  Munoz and a well-placed kill just inside the boundary line gave Mojo an 18-11 lead.  Another lengthy exchange of serves watched the home team take possession of a 22-16 margin.  Workman hammered a spiked return to usher in a three-point run for Mojo to win the set and even the series at 2-2.

The tiebreaker set stayed deadlocked at 3-3, and then at 6-6, and again at 10-10. Munoz pushed the lead to 12-10 in Permian’s favor before Harris came up with the decider on a game-winning dig for the 15-12 victory.  Chants of “Mo-Jo” immediately filled the Fieldhouse.  The Lady Panthers had rallied from a two-set deficit for the 3-2 decision to close out the district slate of games.  It is the third consecutive win for the Black-and-White.

For the first time since 2016, Permian will step out of the district realm and back into the State Playoffs.  The Lady Panthers will travel to El Paso to take on the Franklin Cougars, winners of District 1-6A, in the Class 6A Bi-District Playoff on Tuesday, November 2 at 6:00 p.m.