Odessa, TX – In a game that decided the District 2-6A Championship, Permian’s baseball team pushed the game into two extra innings before falling 12-11 to Frenship on Tuesday at McCanlies Field. 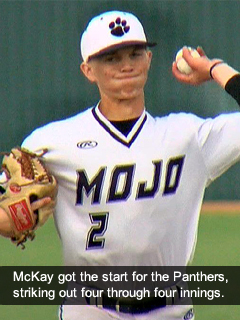 When you have the top two teams in district battling it out for the title, committing six errors in the field through four innings most certainly puts you at an instant disadvantage of achieving success.  The Panthers found themselves trailing 11-6 after completing those four innings.

Frenship opened the game converting two walks, a triple, and two errors into a quick 4-0 lead. Permian would respond with four of its own.  The Panthers collected the first two off of an RBI double by Caleb Boswell. Callen Warren belted out an RBI single to cut the deficit to 4-3.  Mojo managed to bat around and fill the bases, leading to a walk by Bryson Baer to knot the contest at 4-4.

Senior starting pitcher Gus McKay forced four Tiger batters into three infield outs. Taking care of the bottom half of the frame, Xavier Melendez got on base courtesy of a walk and Boswell followed with a single.  Warren ripped out a two-run RBI base hit to push the Panthers’ lead to 6-4 after two innings of play.

The third and fourth innings witnessed Frenship gain an 8-6 lead, and then build onto it with an 11-6 advantage through four innings of play.  After a silent fifth stanza for both teams, Mojo went to work in the bottom of the sixth when Melendez led off with a solo shot over the left field fence to have Permian trailing by four.  Bullpens became active and sophomore Hayden Ramage took over pitching duties for the Black-and-White.  He would provide the answer the Panthers needed and limited the Tigers to two hits during his tenure on the hill.

Far from being done, the Panthers evened the tally in the bottom of the seventh.  Sebastian Bravo sent a line drive shot to right field to plate Peyton Gregory to narrow the difference to 11-8.  Back for more, Melendez hammered another shot over that same left field fence – this time for a three-run homer – to knot the game at 11-11.  The Black Cats had recovered from the five-run deficit induced from the early errors.

In the first extra frame, neither ball team could gain the upper hand forcing the contest into the ninth inning.  The Tigers plated a run on a two-out RBI double to left centerfield to now possess a 12-11 edge.  Stepping back into the box, Melendez saw his Panthers trailing by one with two outs.  He would get hit on a full count pitch for the free trip to first.  The following batter hit into a fielder’s choice to squash the Mojo hopes of rallying back.  Frenship had held on for the 12-11 decision for the Tigers to secure the district title.

After splitting the series with San Angelo Central (9-8, 11-17), Permian is currently suffering a four-game skid which includes being swept by Legacy.  A victory on Friday would give the Panthers a shot at hosting the Bi-District game against one of three possibles out of El Paso’s District 1-6A (Pebble Hills, Eastwood, or Montwood).  Another loss would send Mojo west for the first round of the playoffs as District 2-6A’s third seed.