Richland, TX – The Lady Panthers soccer team competed in the Richland Winter Blast tournament on January 6-8. Permian finished the three-game event winning one, losing one, and drawing a tie in the final match. 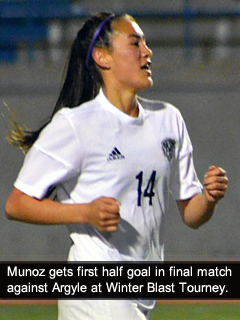 Mojo opened Group D play with a 2-1 loss to Joshua. The following morning Mojo dished out a convincing 6-0 victory over Everman. In the final match, Permian needed a win over group leader Argyle but had to settle with a 2-2 tie.

The Lady Panthers were in a battle with Joshua from the start. Off of an assist from Mya Gonzales, Nyxalee Munoz gave Mojo an early goal lead. A back-and-forth struggle filled the remainder of the first half with Mojo enjoying a 1-0 edge.

Missed opportunities by Permian afforded the Lady Owls to score a pair of goals in the second half to hand the Lady Panthers a 2-1 loss.

Looking to redeem the opening round troubles, Permian completely dominated Everman to the tune of a 6-0 thrashing in the matinee match.

Gonzales got things going with the first of three goals en route to a 3-0 Mojo lead at the break. Kylie Stark made it 2-0 and Gonzales pushed it to 3-0 on an assist from Munoz. Gonzales collected her third goal early in the second stanza, while Munoz and Anai Lopez extended the lead with two more netters for the 6-0 win.

Going into the final group match, Permian needed a two-goal win over Argyle to advance to the tournament semifinal. The Lady Panthers got on the board first on a Munoz goal assisted by Gonzales. The Lady Eagles responded with a goal of their own to knot the match at 1-1. Mojo had two opportunities to retake the lead but a stingy defense by Argyle left the game tied at intermission.

The Lady Panthers came out crisp after the break and immediately went to work. Turning in a solid performance throughout the tournament, Gonzales found a crease and hammered a shot past the Eagle goalie for a 2-1 Mojo lead.

With the clock becoming a factor, Argyle mounted one last charge. Knowing what was at stake, the Lady Eagles pressed into Permian territory and found an opening for the tying goal. The match ended in a 2-2 deadlocked final. Argyle advanced to Saturday’s semifinal, while the Permian girls finished with a 1-1-1 tournament mark.

The Lady Panthers will turn their focus to another tourney, this one hosted in Lubbock on January 13-15.