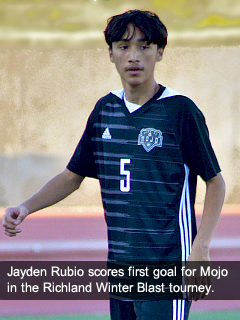 The Panthers began the tournament with a convincing 2-1 win over Arlington Lamar. It’s the first win over a metroplex team since Mojo beat Grapevine 2-1 in 2017. Permian would be dealt a 2-1 loss the following morning by Keller Fossil Ridge. In the finale, the Panthers fought to a 2-2 tie with tourney host Birdville.

Mojo battled the Vikings to a 1-1 tie through 30 minutes of play in the first match on Thursday evening. After gathering in a pass from the left wing, junior Jayden Rubio sent a bullet into the back of the net for the first goal at 9:41 of the first half. Lamar matched that goal just before the break.

Coming out of the intermission, sophomore Johnny Cuellar gave Mojo the go-ahead goal at 5:27 on a shot that split the pipes. The Panthers took the 2-1 win to open tournament play on Thursday night.

Friday’s doubleheader began with a tough bout with Fossil Ridge. Permian fell behind 1-0 in the first half as Ridge out shot Mojo 3-1 in shots-on-goal. At 14:07 of the second half, Alex Ontiveros knotted the contest on a breakaway goal. A break in the defense allowed Ridge to regain the lead with 3:48 remaining. A hard shot from 15 yards out slid just inside the post for the 2-1 advantage and eventual winning goal.

In the evening finale, the hosting Hawks from Birdville collected a first-half goal that would last into the break. Ontiveros scored his second goal of the tournament midway into the second half to even the match at 1-1. Neither team could add to their tally for the 1-1 conclusion.

In a productive road trip, the Panthers finished 1-1-1 and will again be back on the road Monday as they travel north for a non-district meeting with Lubbock-Cooper.