Lubbock, TX – The Mojo Machine looked more itself in Tuesday’s non-district game against Lubbock-Cooper. Permian jumped out to a 34-26 halftime lead and rode that momentum to a 60-51 victory over the Pirates in the Hub City visit. 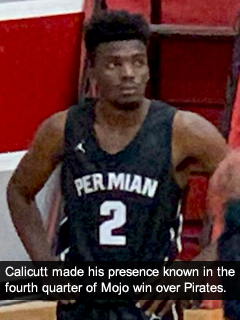 The Panthers continue to overcome the adversities the 2022 season has thrown their way, including injuries that have sidelined players. Picking up that slack, junior Race Herr turned in a solid performance this evening and knocking down 19 points to lead all scorers. Sophomore guard Ben Saldivar backed that up with another 11.

First year Mojo head coach Steven Flores saw the evening as a step in the right direction. “The guys played hard and Race had another great night on defense. We played really good at times.”

The Black Cats took control of the contest early. Buffering a seven-point advantage, Herr made three baskets and a free throw to help Permian get off to a 16-9 first quarter lead. He would be joined by Brian Huitron and Calvione Calicutt in the second frame to push the Mojo lead to 34-26 at the halftime break.

Both teams seemed to focus more on their defensive efforts during the third period. Permian was limited to four baskets while Lubbock-Cooper managed to add three. With the aggressive defense came fouls. The Pirates made all four free throw attempts but still trailed 43-37 by quarter’s end.

The six-point deficit would be as close as the hosts would get the remainder of the evening. Herr nailed a trey to open the final eight minutes as it became evident that the Panthers intended to conclude the game strong and on a positive note. Calicutt, Saldivar, and Jamibrione Anderson each contributed four points en route to a 17-point fourth quarter as the Mojo Machine claimed a 60-51 decision.

Taking a look ahead as the district games resume, Coach Flores added, “We’re going to have to take care of the ball in order to win ball games from this point forward.” The Panthers (1-2, 17-6) will host Midland Legacy (2-2, 14-9) at the Permian Fieldhouse on Friday. Tip-off is slated for 7:30 p.m.