Odessa, TX – The Mojo Machine gained traction in the District 2-6A race by knocking off Midland Legacy 69-47 on Friday night in the Permian Fieldhouse. The Panthers battled the Rebels to an 11-7 edge in the first quarter. From there, Permian simply asserted itself the next three quarters. 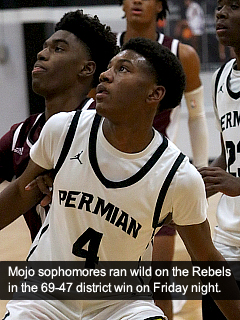 Mojo sophomores Jamibrione Anderson and Ben Saldivar led the way for Permian scoring 22 and 18 points, respectively. The Panthers put on a clinic nailing perimeter three’s in the lopsided affair. Saldivar finished with four treys and Anderson made three, as the pair accounted for seven of the nine registered in the win.

Noticeable improvements to the Black Cats offense came in the way of better ball-handling and team play. In addition to the reduction in turnovers, Permian shot 86 percent from the free throw line, making 12 of the 14 attempts.

The Panthers utilized their quickness to neutralize Legacy’s potent offensive threat. The first eight minutes witnessed an exchange of possessions that resulted in a four-point Mojo advantage, with Calvione Calicutt making a bucket as the opening quarter concluded.

Permian began to assert its will in the second stanza, racking up 19 points to hand the Rebels a 10-point deficit. Anderson led that charge with 10 points, while Race Herr contributed another seven for the Mojo Machine to sit on a 30-20 halftime lead.

Legacy opened the third quarter cutting into the Mojo lead, with most of the points coming from the free throw line. Midway through the quarter, Permian started to turn the momentum and take control of the game. Saldivar initiated a three-ball frenzy that carried over into the final period. The Panthers knocked down six treys in the second half alone – nine total – to essentially put the game out of reach.

The Mojo Machine erupted with 25 fourth-quarter points to secure the 69-47 victory and leap-frog the Rebels in the district standings. In a projected “rebuilding season”, Permian has positioned itself to remain in the thick of the state playoff picture with a line-up that includes two juniors and three sophomores getting a good-percentage of the game minutes.

The Panthers (2-2, 18-6) will look to put another mark in the District 2-6A win column, when they host Abilene High on Tuesday at the Permian Fieldhouse. Tip-off is slated for 7:30 p.m.