Odessa, TX – After trailing by a goal at the intermission, the Permian girls soccer team exploded with four second half goals to claim a 4-2 playoff victory over El Paso Americas.  The Class 6A Bi-District match was held on Thursday afternoon at Ratliff Stadium. 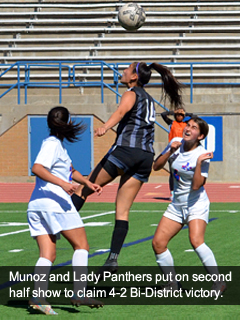 The Trailblazers and Panthers stayed even through much of the first half with neither gaining success finding the back of the net.  Permian’s defensive posture limited shots on goal, but Americas eventually found just enough crease to collect a goal at 29:21 in first half.  It would be the only score of the half.

During the break Permian head coach Chad Peterson had to make a few adjustments.  “It was a battle. The last couple of weeks we’ve allowed ourselves to get into battles and kind of talk ourselves out of finishing them.  Today, we finished the battle and can reap the benefits from it.  We had to throw an extra player up high.  It kind of gave up a little bit of space behind us, but we were able to close up that space real well.”

Coming out in the second half, Permian’s Anai Lopez got past the Americas defense and found Mya Gonzales to even the tally at 1-1.  Lopez came back and nailed shot off of a ricocheted ball to give Mojo a 2-1 lead.  El Paso managed to again knot the match on a penalty kick at the midway point of the second half.

According to Peterson, “We got the early goal, and we were able to keep some pressure on them. The goals just started coming.  We banged and banged and banged away.  At the end of the day, we get four goals out of it, and we’re off to the next round.”

Taking control with the final pair of goals,  Nyxalee Munoz was pivotal and first sent a pass to Mya Gonzales, who knocked down the goal at 12:46 to regain one goal advantage at 3-2.  Munoz offered up another assist from the corner, this time to Lopez for the insurance score to put Mojo up 4-2 at 2:24 remaining on the clock.  That’s how the contest would end.

Coach Peterson added, “You can’t be in the last game of the playoffs until you’re out of the first one. Today, we gave ourselves a chance to play again, and that’s all we can do every time we line up.”

Permian now advances to the Area Round of the Class 6A state playoffs and will play the winner of Friday’s L.D. Bell – Keller Timber Creek match slated for 6:00 p.m.  Mojo will more than likely meet them at Abilene’s Shotwell Stadium on Monday or Tuesday.  Flipping home-and-home could still be on the table.