Odessa, TX – The Permian soccer teams have finished their district slate of matches and both have qualified for the second season – the state playoffs.  The Bi-District Round begins Thursday for the ladies and Friday for the guys. 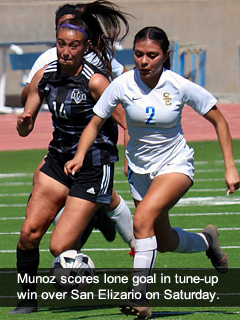 Both Mojo teams were able to schedule pre-playoff warm-up opponents over the weekend.  In Saturday’s noon meeting with San Elizario, the Lady Panthers collected an early goal to come out victorious in their meeting with the Lady Eagles at Ratliff Stadium.

It would take all of two minutes and 10 seconds into the first half for Mojo’s Nyxalee Munoz to break past a defender and send a shot past the Eagles’ goalkeeper for an early 1-0 Permian lead.

After a fierce bantered exchange between the 30-yard lines, the stingy defenses provided by Permian and San Elizario would limit shots-on-goal the remainder of the half.

After the intermission, neither of the teams were able to break the silence for the lone Munoz goal to be the decider in the playoff tune-up match for both squads.

Both Permian goalkeeps Madison Morga and Maria Vasquez spent minutes in the box during the shutout win.  San Elizario proved to be a worthy opponent for the Lady Panthers, particularly on defense. Prior to the contest, the Lady Eagles rolled through District 1-4A with an unblemished 8-0 record (14-4 for the season).  Saturday was the first loss for the visitors since dropping a 2-0 tournament defeat to Canutillo, and that was over two months ago.

Permian will now take its 12-5-3 season record into the Bi-District Round of the state playoffs as the Lady Panthers will host El Paso Americas on Thursday at 3:00 p.m. in a revisiting of last year’s first round bout at Ratliff Stadium.  Mojo won that Bi-District contest by a tally of 3-0. The Trail Blazers finished in third place in 1-6A with a 9-5 district record (13-9 overall).

The Mojo Boys (5-4-3 in district) traveled to Snyder for their pre-playoffs warm-up match on Friday evening. The Tigers won the contest with a 4-0 decision on the unfriendly confines of Tiger Field.

Permian will catch state-ranked Eastlake for the opening round playoff match that is set for March 25 in El Paso.  The Falcons have amassed a 19-2 mark for 2022, which includes going 12-2 in District 1-6A. They are currently ranked #4 in Texas, but this Friday’s contest just might be their toughest challenge this season.  That’s why the game is played.