Odessa, TX – Even after jumping out to a seven-run lead early, it would still take an eighth-inning rally for Mojo to claim a 10-9 district victory over Odessa High on Tuesday evening at the Ratliff Softball Complex. 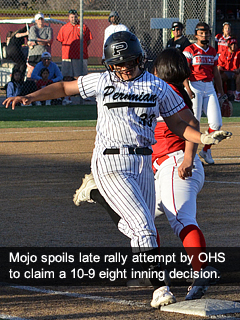 Alexis Belen would get the start the circle for Permian.  The senior hurler would dish out six strikeouts and a lone walk through five and two-thirds innings.  Three of those K’s coming in the opening frame.  After giving up a lead-off single, Belen would hand out chairs to the next three batters.

The Lady Panthers went on the offensive in the bottom half of the inning to set an early tempo.  Tiggy Rayos opened with a base hit to left field and Emma Chavez drew a walk to get two aboard.  Mackenzei Bernal’s base rap to centerfield would load the bases with no outs.  Taylor Ramirez unleashed a shot that just cleared the left centerfield fence to empty the bases with the grand slam blast for a quick 4-0 lead.

Odessa High began the second stanza with another lead-off single, but again the defensive gloves put a halt to the OHS threat. A big league catch by Bernal at third base was gathered in and the runner was thrown out at first.  A strikeout ended the at-bat for the Red-and-White.

After retiring three Broncho batters in the top of the third, Permian went back on the attack.  Bernal belted out shot that went yard to give Mojo a 5-0 advantage.  Back-to-back doubles by Iliana Garcia and Makayla Sanchez pushed the deficit to 7-0 in Mojo’s favor after three complete innings.

The Lady Bronchos got on the board in the top of the fourth, courtesy of a two-bagger and pair of base hits.  An RBI double by Bernal matched that run for Permian to maintain the seven-run difference as the crosstown rivals ventured into the fifth inning.  A three-run homer chipped into the Black Cat lead to separate the tally to 8-4.

The visiting Bronchos broke the deadlock when a lead-off full-count homerun sailed over the centerfield fence.  Permian would get out of the inning with two ground outs and a strikeout, but for the first time all game the Lady Panther were down by a run and now trailed 9-8.

Refusing to let the game get away, Permian bats stayed active.  Belen started things off with a double to right field.  Rayos followed with a base rap to center to post runners on the corners.  Chavez hit a sacrifice grounder to the second base, plating a run to even the score at 9-9.  Bernal sent a hard hit bullet to right field, deep enough for Rayos to tag up and cross the plate for the District 2-6A victory.  Mojo sent the Wild Bunch back to the west side of Odessa with a 10-9 loss.

The Lady Panthers travel to Midland High on Friday with the first pitch at 6:30 p.m. in another district tilt.