Odessa, TX – The Permian girls soccer team picked up a 3-0 victory over El Paso Americas on Friday afternoon and accomplished two things – remain unbeaten in 2021 and advance in the Class 6A state playoffs. 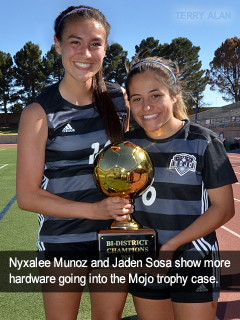 The Lady Panthers collected three first half goals and then cruised through the second half to record the shutout win at Ratliff Stadium. It is the second consecutive Bi-District Champion title for Mojo.

The contest featured Permian and its decisive speed against the Lady Trail Blazers’ assertive physical play.  Lady Panthers got their first goal just under six minutes into the contest.  Nyxalee Munoz scored on a long driving 20 yarder that split the posts and into the back of the net for a 1-0 lead.

Americas tried to respond and made two decent advances down the field, but came up empty in both attempts.  The Lady Panthers looked to take a two-goal lead midway into the match but a Munoz shot from the left wing sailed over the crossbar to keep the difference at 1-0.

The Lady Blazers looked to even the match with six minutes until the half.  Advancing the ball on a two-on-two set, the Americas’ shot on goal was gobbled up by goalkeeper Maria Vasquez.

Mojo immediately went back on the offensive.  Mya Gonzales uncorked back-to-back goals to extend the deficit to three.  The first goal came with 3:58 until the break.  Munoz led the charge and made a perfectly set pass to Gonzales for the easy tap in.  Gonzales administered the dagger on a breakaway goal with just 1:14 until intermission.  It was setup on a pass from Anai Lopez.

Coming out of the intermission break, the second half featured a strong defensive display by both clubs.  With much of the second 40 minutes being spent between the 30-yard lines, Permian’s unbeaten streak stayed in tact with a 3-0 shutout victory.  The Lady Panthers were presented with a gold ball trophy for a well deserved playoff win.

Permian (13-0-5) will now turn its attention to returning 2019 state champion Southlake Carroll (10-5-6).  The Area Round playoff is set for Tuesday 5:00 p.m. at P.E. Shotwell Stadium in Abilene. The Lady Dragons beat Fort Worth Paschal by the same 3-0 margin in their first round match on Thursday.  MaxPreps has Permian currently ranked at #25 statewide, with Carroll sitting a little lower at #35.