Abilene, TX – Battling through a 1-1 first half draw, Permian’s girl soccer team collected an overtime goal to claim a 2-1 Area Round victory over Keller Timber Creek in the Class 6A state playoffs.  Tuesday afternoon’s win at Shotwell Stadium punched Mojo’s ticket to advance to the Regional Quarterfinal. 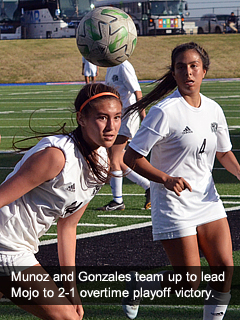 The Lady Falcons struck first, converting a short-range penalty kick to take an early 1-0 lead at eight minutes into the contest.  Timber Creek proved itself to be a worthy playoff opponent behind solid play from its defense.

Finding a crease and charging into the Falcon end of the pitch, Nyxalee Munoz sent a left-footed shot between the pipes from 15 yards out for the 1-1 equalizer at the 28th minute in the first half.  That tally would hold up and remain the same into the intermission.

The fierce defensive battle would continue in the second half.  Midway into the half, things looked promising as Mya Gonzales and Munoz executed a near perfect give-and-go, but a congested box full of defenders denied the attempt and the match remained deadlocked at a goal each.  The Lady Panthers had another opportunity to break the tie four minutes later but Munoz’s shot ricocheted off of the crossbar.

As time expired on the second half, neither club could cash in and the contest was forced into overtime to decide a winner.  It would take all of three minutes into the first overtime for Permian to gain the lead.  Belen Guerrero advanced a pass and Anai Lopez guided the ball to a waiting Gonzales for the finish.  The Lady Panthers now led by a goal and appeared to have found the full compliment of a second wind.

The final 10 minutes went scoreless, and that was good enough for the Black Cats to claim the 2-1 playoff victory.  Permian (15-5-3) now advances to the Class 6A Region I Quarterfinal and will play Southlake Carroll (17-1-4) out of District 4-6A.  The meeting comes one match deeper into the playoffs than just a season ago.

The state-ranked Lady Dragons defeated Frenship 3-1 in their Area Round match.  Mojo will meet Carroll back here at Shotwell Stadium on Friday at 1:00 p.m.  In a reversal of today’s defensive battle, the anticipated high-scoring affair will feature an offensive assault from both clubs.

The winner of the Dragons-Panthers will likely have #2 Allen (20-2-3) waiting in the wing for a potential Region I semifinal dance on April 8.