Odessa, TX – One of Permian’s Boys Soccer team captains has been named to the All-District superlative list, while the other two senior captains were recognized as First Team selections. 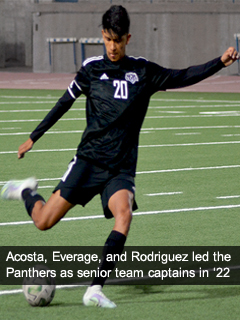 Senior forward Amari Everage received Defensive Most Valuable Player honors in the 2022 All-District 2-6A list released today.  In his fourth year as a Mojo varsity player, Everage feels honored to receive the honor but understands the importance of teamwork.  “I’m appreciative, yes sir, but I couldn’t have done it without the other members of our team.”

The Permian Boys varsity soccer team finished the ’22 campaign qualifying for post-season and were Bi-District finalists, which included a trip to El Paso to play state-ranked EP Eastlake.  The Panthers collected five wins, three ties, and four losses in district play this season.