Odessa, TX – The Permian soccer teams can call the day a success as they benefit from disposing of Midland High on Tuesday at Ratliff Stadium.  The ladies collected a 5-3 victory, while the Mojo guys scored a 2-1 decision. 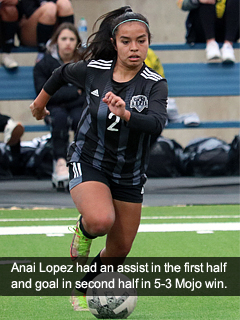 Coupled with San Angelo Central having the day off, the Lady Panthers move into first place by a point in the 2-6A standings.  The two will face each other this Friday in San Angelo for what will likely decide a district champion.

Nyxalee Munoz and Mya Gonzales led the charge with a pair of goals each in today’s win over the Lady Bulldogs. Anai Lopez added another goal plus an assist.

Midland High were first to get on the scoreboard after the two teams provided plenty of defense in the early stages of the first half.  A 20-yard rainbow kick sailed just past goalkeep Madison Morga’s outstretched mitts and into the net for the 1-0 advantage at 22:51.

On an assist from Munoz, Gonzales offered up the equalizer just four minutes later to knot the match 1-1 at 18:32.

The Lady Panthers gained a lead, that they would refuse to surrender the remainder of the evening, with 2:30 until the intermission.  Charging into Midland territory, Lopez led Munoz for a bullet that split the pipes for a goal and 2-1 Mojo lead. The one-goal edge would hold into the break.

Permian opened the second stanza with an insurance goal when Lopez gathered in a pass from Gonzales for a quick 3-1 lead.  The Lady Bulldogs responded with a goal of their own to stay within range of the dominating Lady Panthers.  Mojo put any doubt to rest with back-to-back goals pushing the deficit to 4-2.  Munoz and Gonzales delivered the one-two punch to give Permian a 5-2 lead.

MOJO JUMPS BULLDOGS IN STANDINGS
While the Permian girls took care of business in the matinee meeting to begin the evening, the Mojo boys finished the night with a team win over a worthy opponent in Midland High.  Going into the match, the two squads were even in the 2-6A standings with nine points and both needing the victory to stay in the playoff hunt.

In the highly contested match, two defensive strategies played out as goals quickly became a premium.  Sophomore Johnny Cuellar provided the first goal for the Panthers in his first start.  Late in the first half, senior team captain Amari Everage gave Mojo the needed boost for a 2-0 lead that would last into intermission.

Permian was very tentative in their goal defense, clearing multiple corner and free kick attempts as the contest reeled on.  The Bulldogs made three serious advances in the second half, but Mojo goalkeeper Kristian Reyes denied those efforts each time.

Midland High managed to break the silence with a lone netter that narrowed the deficit to a goal.  A crisp shot from the right side slipped just inside the pipe with 10 minutes remaining.  Eighty minutes of fierce back-and-forth competition ended favoring the Panthers in the 2-1 finale.

The Panthers stay in the hunt for a playoff spot with a 4-3-3 mark for 11 district points with two matches remaining on the schedule.  The Bulldogs have nine points and now trail by two.

COMING DOWN TO THE WIRE
The Permian soccer teams will be back in action this Friday with plenty on the line.  Get ready for sparks to fly in the Concho Valley.  In the road trip to San Angelo, the Lady Panthers will kick things off at 5:30 p.m. and the Mojo guys will follow at 7:30 p.m.

The regular season will conclude on March 15, as Permian hosts Midland Legacy for Senior Night in the district finale.  The state playoffs will follow!