Abilene, TX – The Permian boys basketball season came to a close at the hands of North Crowley at Abilene High’s Eagle Gym on Tuesday night.  The Class 6A Regional Quarterfinal ended in a 53-43 loss, three rounds into the state playoffs. 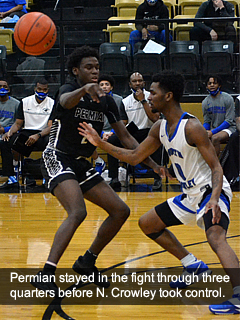 North Crowley set the tempo from the very first tip, but Permian was able to stay even with the metroplex Panthers through three of the four quarters.  After battling through a 13-12 opening period, sophomore Jamibrione Anderson led the charge in the second frame with a pair of treys to assist Mojo in taking a 23-22 halftime lead.

Anderson finished the game with 24 points to top all scorers.  Ben Saldivar, another sophomore, backed that up with eight points.  By the end of the third stanza, North Crowley had regained a two-point edge at 38-36 but Permian was still very much alive and in the ballgame.

In the fourth quarter, things begin to change.  The Metroplex Cats gained the upper hand on a 7-0 run to start the final eight minute of play.  To break up the NC run, Saldivar was sent to the free throw line where he made a pair of free throws to narrow the deficit to 45-40.

Arid shots and bad passes were converted into another four points by North Crowley as they extended their lead to 49-40.  Anderson answered with a basket and-one to cut the difference to 49-43.  That’s as close as Mojo would get the remaining three minutes in the 53-43 season-ending loss.  NC had managed to limit Permian to seven points in the final period while tacking up 15.  They will face McKinney on Friday.

After sharing second place with Odessa High in the final District 2-6A standings, the Panthers finish the season with a 26-9 mark.  Achievements of the 2021-22 season include claiming Bi-District and Area Round Championship titles.  Permian will have several sophomores and juniors with varsity experience returning next season.