Euless, TX – The Lady Panthers opened the first day of the Turf Wars Softball Tournament with a tough loss to Waco Midway before completely dominating Euless Trinity in the nightcap. 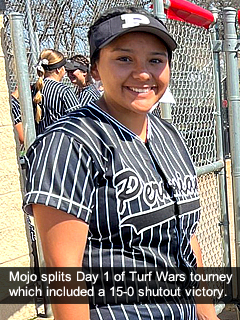 The Midway Pantherettes set the tone early by converting a double and three base hits into four runs in the top of the first of Game One.  They would add another run in the second inning to have Permian trailing by a 5-0 deficit after just to innings.

The Lady Panthers continued to struggle at the plate. What pitches that were put into play ended up being fielded to limit Mojo to a solo hit – a double from Anyssa Cruz – through four innings of play.

Midway turned a pair of doubles into another run in the top of the fifth to extend its lead to 6-0.  While the Pantherettes continued to keep Permian batters off the bases, they would collect one more run in the top of the sixth frame.  A line drive to the shortstop and two more strikeouts brought the contest to an end with Midway claiming a 7-0 win.

Lanee Brown was credited with striking out nine Mojo batters.  Time limit halted the game at the end of the sixth inning.

After a short break, the Lady Panthers were back at it and ready for the second game of the evening.  Permian would now take on hosting Euless Trinity.  Mojo would completely flip the script in the nightcap by uncorking 13 hits en route to a 15-0 blanking of the Lady Trojans.

The Lady Black Cats came out with tenacity in their first at-bat to establish an impressive 11-run start in the top of the first.  Cruz drew a walk and advanced to second o a passed ball.  Madilyn Martinez belted out a shot to left field and off the Panthers went.  Makayla Sanchez made it 2-0 on an RBI single.  Taylor Ramirez would join her on a Trinity fielding error, and Emma Chavez would load the bases after getting hit by a pitch.

Runner rotation began as Iliana Garcia and Tiggy Rayos each reached base to plate another two runs.  An RBI double by Cruz pushed the Mojo lead to 6-0.  Batting around, Martinez got aboard in her second at-bat of the inning.  Mackenzei Bernal and Sanchez kept the flow of base runners exchanging bases.  Ramirez hammered out an RBI triple to plate another three runs for an 11-0 Permian lead after just one-half inning of play.

Garcia, Rayos, and Cruz all collected hits in the second stanza for Mojo to add two more runs to the tally and 13- lead.  An RBI single in the top of the third was followed by a Madi Garcia homerun blast in the fourth for the Lady Panthers to enjoy a comfortable 15-0 lead.  In their final plate appearance, the Lady Trojans could only muster a pop-out, ground-out, and strikeout to end the game.

Cruz was 2-for-2 at the plate, while three other Mojo batters finishing 2-for-3 with a bevy of RBI hits.  Anaya Paredes and Madilyn Martinez split time in the circle, limiting Trinity to two hits and no runs.

Day Two of the Turf Wars tourney will feature Permian competing against Fort Worth Brewer in the early morning game.  The Lady Panthers will follow that with a date with Keller Fossil Ridge at 11:00 a.m.