Hurst, TX – With a cool breeze under a hazy early morning sky, the Lady Panthers split Day Two of the Turf Wars Tournament against Fort Worth Brewer and Keller Fossil Ridge at the Bell Lady Raiders softball field on Friday. 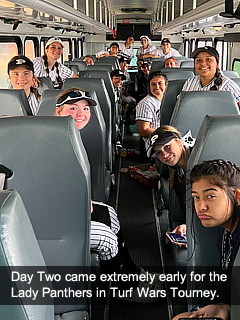 The tournament action began at 9:00 a.m. with the Lady Panthers battling the Lady Bears in an intense exchange though five innings.  A lead-off walk and Mojo fielding error had Brewer threatening in the opening frame.  An RBI double had Permian trailing 2-0 after just a half of an inning.

Anyssa Cruz lead the Lady Panthers to answer with a run of their own in the bottom half of the inning.  Two passed balls gave Cruz the opportunity to steal second and third base. A wild pitch would allow her to cross the plate to narrow the deficit to 2-1.

The Lady Bears would retire Permian in order in the next stanza, but the Lady Panthers returned the favor for a scoreless second inning.  The third frame would be a repeat of the first, as Brewer tacked a pair of runs on the scoreboard courtesy of a base hit, error, and misplayed ball that was hit into the outfield.  Emma Chavez ripped a solo shot over the centerfield fence for Mojo to trail 4-2 after three complete innings.

Brewer converted three consecutive singles into two more runs in the top of the fourth, but Mojo responded with three to cut the difference to a single run.  Iliana Garcia and Tiggy Rayos donated two base hits to a pair of walks to stay within striking distance.

Permian was able to contain the damage of four straight Lady Bear singles into giving up only one run in the top of the fifth.  The Lady Panthers had no answer in the bottom of the inning to suffer a 7-5 loss to begin the day.  Mojo finished the effort committing five fielding errors.

Hits were scarce in the early innings as Permian and Fossil Ridge were forced to battle through a pitching duel in the second game for the Lady Black Cats.  Keller was able to break the silence in the bottom of the third inning for a 1-0 advantage.  Fossil Ridge recorded the run after four base hits and a hit batter got aboard.

Ground outs, fly outs, and strikeouts dominated the next two innings for both squads, as Permian remained a run behind after five complete innings of play.  The Lady Black Cats came to life in the top of the sixth.  Alexis Belen led off with a two-bagger and was joined by Celina Loftin after she drew a walk.  An RBI double by Madilyn Garcia gave Permian its first lead of the game at 2-1.

On a sacrifice grounder, House slapped a shot to the second baseman as Garica crossed the plated for a 3-1 Mojo advantage.  Fossil Ridge would get one of those runs back in their last at-bat, but Mojo held on for the 3-2 tournament victory.

Anaya Paredes got the start in the circle and went three innings, striking out five, walking one, and giving up a run.  Belen came in to finish the last three innings, picking up two strikeouts and getting the win for the Lady Panthers.

The third and final day of the Turf Wars tournament will pit Permian against Colleyville Heritage in another early morning game on Saturday.  The Lady Panthers will conclude the tourney taking on Prosper Rock Hill.