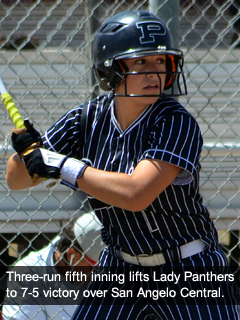 Nyssa Dunn was credited with the win after providing four innings of service in the circle.  Offensively, Madison Garcia and Emma Chavez each contributed two hits in the victory, while Anyssa Cruz hammered out a game-changing shot late in the contest to give the Lady Panthers the lead and eventual win.

Working through a scoreless opening frame, Permian collected the game’s first run in the second.  After sending a line drive double into centerfield, Garcia scored on a Cruz sacrifice flyball to right field.  SA Central countered with three runs in the bottom half of the inning, courtesy of two Mojo fielding errors and a booming triple to right.

The Lady Panthers narrowed the deficit to a run in the third inning, but could have done way more damage.  Tiggy Rayos belted out a base hit, and Chavez followed with another single with two outs.  Mackenzei Bernal joined them after drawing a walk on four straight pitches.

With all bases occupied, Garcia sent a shot to left field to plate Rayos.  Runners would be stranded after an infield ground ball ended the at-bat with quick throw to the catcher for the force out.  San Angelo tried to answer after filling the bases on three base hits, but Bernal hauled in a bullet down the third-base line en route to snuffing out the threat.  Mojo remained in striking distance, trailing the Bobcats 3-2.

The fourth inning went quick with neither team able to add any runs to the scoreboard.  The fifth frame provided the spark needed for Mojo to gain control of the game.  Chavez gathered a free trip to first after getting hit by a pitch, and Bernal drew a walk.  Garcia contributed a sacrifice fly to deep right to plate two runs and take a 4-3 Mojo lead.  The Cruz triple pushed the difference to two runs in Permian’s favor at 5-3.

Chavez offered up an RBI single in the top of the sixth to extend the tally to 6-3.  Central fought back behind a pair of base hits and another Mojo fielding error to close the deficit to 6-5.  That would be as close as San Angelo got as the Lady Panthers added a run in the seventh.  The Lady Cats were retired in order in their last at-bat for the 7-5 Mojo victory.

Permian will close out the district slate hosting Midland Legacy next Friday, April 22.  The junior varsity is scheduled for a 4:00 p.m. start with the varsity following at 6:30 p.m.