Odessa, TX – Falling behind by six runs in two innings, Permian’s varsity softball team couldn’t make up the deficit to Odessa High in an 11-6 District 2-6A loss on Saturday afternoon at the Ratliff Softball Complex. 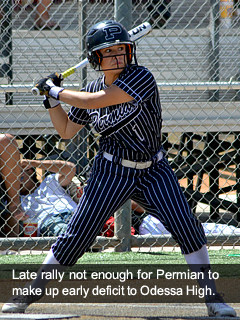 Alexis Belen got the start in the circle for Permian.  The senior hurler dished out three strikeouts but gave up six hits through three innings of play.  That would also include two homeruns that accounted for six runs.  Madi Martinez would also give it a go but fared about the same, striking out three while allowing five hits over three innings.

After being retired in order, the Lady Panthers watched the Lady Bronchos put two runners aboard courtesy of a lead-off walk and base hit.  Odessa High’s clean-up hitter did exactly that and pelted a shot over the right centerfield fence for a quick 3-0 OHS lead.

Odessa High repeated its offensive production in the second frame.  After sending a batter to first with an inside pitch, another blast over the same right centerfield fence push the Bronchos’ lead to 5-0.  OHS would convert two base knocks into another run for a 6-0 lead after just two innings.

Permian was able to collect its first run in the top of the third.  Anyssa Cruz drew a walk and Tiggy Rayos beat out an infield chopper to put two aboard with one out.  After executing a successful double steal, a passed ball would green light Cruz to cut the deficit to 6-1.  Odessa High answered with a pair of runs in the bottom half to increase its lead to 8-1.

Permian added two runs in the fourth to trail by five.  Ramirez led off with a single and Martinez sent a hard hit ball down the left field line to plate Ramirez.  Martinez scored two batters later to make it an 8-3 ball game.  The Lady Bronchos matched that tally with a base rap and another homerun for a 10-3 advantage.  The Lady Panthers scored two runs in the fifth stanza and another in the sixth frame to trail 11-6.  That’s how the contest would end.

Permian will return to its own diamond at Ratliff on Tuesday to host Midland High.  First pitch for the junior varsity will be at 4:00 p.m.  The varsity will follow at 6:30 p.m.