Odessa, TX – In the final game of the District 2-6A slate, Permian’s softball team utilized a three homerun fifth to gain a 4-2 advantage.  Midland Legacy responded with three runs in the top of the sixth to claim a 5-4 decision on Friday evening at the Ratliff Sports Complex. 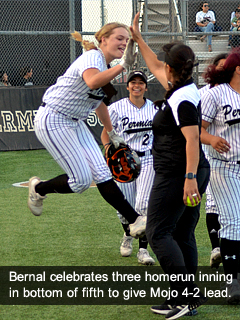 Winds out of the south at 35 mph and an eight-inch strike zone made for a tough backdrop as Permian and Legacy took the field for Mojo’s Senior Day.  Alexis Belen got the start in circle, and Madi Martinez took over pitching duties the last three innings.  The duo dished out eight well-earned strikeouts while walking seven.

Mojo utilized three homeruns to propel a four-run surge in the fifth inning.  Martinez got things started with a lead-off blast that cleared the left field fence.  After Tiggy Rayos got aboard on a base knock, Emma Chavez rocketed a shot to centerfield that defied the stiff wind blowing against it.  In Mackenzei Bernal’s lone plate appearance, another homerun pushed the Permian advantage to two runs.

Prior to the surge, the Lady Panthers had been held scoreless.  Legacy coupled a base hit, walk, and hit batter to take a 1-0 lead in the opening frame.  The Rebels made it 2-0 in the top of the fourth on a pair of walks and RBI single.

Now trailing 4-2, the Rebels were able to fill the bases off of a base hit and two walks with one out.  An RBI double plated two runs to knot the contest, and an ill-advised throw to second base would green light another run to make it home for Legacy to re-establish a lead they would retain the final two innings.  In the following six outs, Permian managed to place only one runner on base and that was courtesy of a walk.

The Permian varsity finished the 2022 season with an 18-15 record.  In the early game, the Permian junior varsity completed another one of its late inning heroics by rallying past the JV Rebels to take a 6-5 season finale victory over Legacy.