Lubbock, TX – In a tough fought game, Permian’s boys basketball team won the Caprock Classic for the third consecutive year with a 51-48 victory over Midland Christian.  The Saturday night finale was hosted at the Rip Griffin Center before a near capacity crowd.

The night provided several highlights and even a milestone.  DJ Johnson came up clutch and cranked out the three-balls to lead all scorers with 19 points. Keyonta Johnson finished the night with nine points, while Shy Stephens-Deary added eight and collected All-Tournament honors. Nakavieon White was named tourney Most Valuable Player. 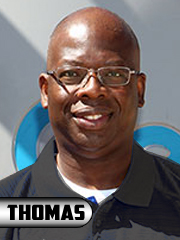 With the victory, head coach Tim Thomas reached his 500th career win.  After the game celebration, he shared a little insight to his journey, “This is my 22nd year as a head high school basketball coach. The wins are a good thing, but what coaching is about and the enjoyment for me is helping and seeing young men become more mature, respectful, and responsible people.  I think that’s the most important aspect a coach can give to kids and society.”

Thomas confessed, “The best/most important ‘wins’ I have received are the calls, texts, and social media contacts from former players saying how they understand and appreciate what we were trying to teach them and how it had an influence on their lives.  It’s about relationships – about the kids who still stay in touch with you for advice or just to share good news happening in their lives.”

After a shaky start with arid shots and turnovers, the Panthers settled in midway into the first quarter.  DJ Johnson provided the early spark with a pair of perimeter three’s and two baskets.  Trying to keep pace, Rayshad Chambers sprinkled in a couple of buckets for the Mustangs.  Keyonta Johnson also dropped in a three-pointer for Permian to take a 13-9 lead.

Midland Christian narrowed the deficit to a three points in the second frame.  Four Mustang players each added a goal, while the Black Cats relied on the soft touch of Keyonta to match the scoring.  Nipping on the Mojo heels, Midland threatened to take the lead with under two minutes until the half.  JJ Vizcaino made two crucial free throws for a Permian 22-19 lead, but MCS’s Joseph Venzant made another basket as time ran out on the first half.  The Panthers led 22-21 at the intermission.

The third stanza was heavily controlled by the Permian defense.  While the Mustangs were being limited to 12 points, the Mojo Machine began to roll.  The two-time defending champions of the tournament cranked out 18 third quarter points.  A trio of three’s by Vizcaino and Johnson gave the Panthers some breathing room.  Stephens-Deary got into the act with two goals, and White added another bucket to extend the lead to 40-33.

As would be expected from two successful basketball programs, the Panthers and Mustangs left their best efforts on the court in the final period.  Jase Taylor fired two big time shots that dropped into the cylinder.  Venzant countered with four points of his own.  Midland’s Mitch McCann cut into the Permian lead with a short jumper, and then came back with a three-pointer.  Johnson matched the three-ball to preserve the three point lead.  With time running out, an exchange of trips to the free throw line left Midland Christian on the short end of a 51-48 decision.  The Black Cats prevailed to claim the third consecutive Caprock Classic title.