Odessa, TX – Finally being able to enjoy the confines of the Permian Fieldhouse, the Panthers played host to Oklahoma City Storm on Tuesday afternoon.  The Mojo Machine dealt with a scrappy bunch, but was able to dish out a 59-34 decision to the out-of-state visitors. 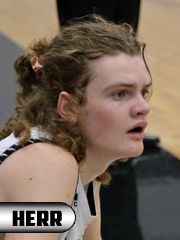 The meeting will more than likely not be remembered as a high-octane, snot-slinging, run-and-gun affair, but for the Mojo Machine it served its purpose and allowed for more preparation toward the district run that lies ahead.  Shy Stephens-Deary and Race Herr led all scorers with 15 and 11 points, respectively.  Oklahoma City’s Zander Bluitt finished with 10 points to lead the visitors.

In a team motivated win, Permian had 10 players making a mark in the scorebook.  The Panthers got off to a solid start, taking a 17-6 first quarter lead with Stephens-Deary accounting for seven of those points.  Oklahoma had its best production in the second frame by adding 14.  The Mojo Machine topped that with 19 points to extend the lead to 16 at the break.  Herr was responsible for five of those, as he knocked down all but one free throw in his six attempts from the line.  Cedric Baty added a perimeter trey for a 36-20 halftime lead.

The Permian defense remained ruthless in the second half, limiting OKC to five points in the third period and nine in the final eight minutes. Tremayne Baty and Ben Saldivar led the charge for the Panthers in the third quarter, while Dra McGee and Calvione Calicutt turned in elevated performances defensively on the other end of the court.  In a valiant effort, the Storm simply could not gain any ground to cut into the deficit.  The Black Cats held a 48-25 advantage by quarter’s end.

Ball control ruled the final stanza.  Permian added six points from free throws, leaving a bucket by Coco McCoy and 3-pointer from Kyson Moreno to close out the scoring in a 59-34 victory for the Mojo Machine.  The battle of neighboring states once again went the Texas way.

For Oklahoma City Storm, they will make their way to the Hub City for a game against Lubbock Trinity Christian before heading back home.  The Panthers improve their season record to 9-3 and will resume District 2-6A action on Friday, New Year’s Day, visiting the Bulldogs in Midland.  Tip is slated for 6:00 p.m.