San Angelo, TX – The Central Bobcats scored the game’s first 10 points.  From there, Permian took over the Catfight on the Concho in a 58-38 District 2-6A securing victory at San Angelo Stadium on Friday night.

Central took the games opening drive down the field, but the effort got snubbed out on an interception by Corey McCoy in the endzone.  Permian’s opening series, not near as exciting, went three plays and a punt.  The second possession for the Bobcats ended when they failed to convert a 4th-and-6 at the 30-yard line.

Turnovers played their part midway into the opening frame.  The Panthers fumbled in their own territory, giving Central a second opportunity at points with a short field.  The Bobcats returned the favor by coughing up the ball inside the 10-yard line.  Central did manage to break the deadlock late in the quarter on a 13-yard TD strike for a 7-0 lead.

A 39-yard field would extend the Bobcat lead to 10-0, but Permian began to settle in to build some momentum.  Like two heavyweights, an exchange of jabs consisted of a 5-play, 70-yard drive with Harper Terry connecting on a 20-yard TD pass to Shy Stephens-Deary.  Central countered with another touchdown, and the Panthers added a short field goal.

The Bobcats fumbled the ensuing kickoff at the 28 and the Panthers immediately delivered a hard right.  Taking a backward pass from Terry, Rodney Hall rainbowed a 32-yard touchdown pass into the hands of Stephens-Deary.  Terry followed and went uncontested into the endzone for the two-point conversion to knot the game at 17-17 at the break.

The Panthers would roll 67 yards in eight plays to take their first lead of the game to open the third quarter.  After forcing the Bobcats to turn the ball over on downs, Mojo extended the deficit on the next possession.  The drive would get capped with a short pass from Terry to Stephens-Deary for a 31-17 lead.  Central was able to cut into the difference to close the third quarter trailing by seven.

Permian was not to be denied in the fourth stanza, outscoring Central by two touchdowns.  The aerial assault would stun the Bobcats.  Passes of 58 and 18 yards set the Panthers up a short touchdown run by Terry.  Mojo forced Central to punt for the first time all night.  That would lead to a 6-play, 63-yard drive featuring Andy Castillo reaching paydirt for a 45-24 Permian edge midway into the fourth.

After a trade of scores, Bryce Woody would deliver the dagger when he intercepted a Bobcat pass at the 40 and returned it all the way down the Central 2.  Castillo played clean up and bulled his way into the endzone for another Mojo score.  The Bobcats had one last TD drive left in the tank, but it wouldn’t be enough as the Panthers claimed a 58-38 victory and at least a share of the district title.

Terry led all rushers with 131 yards, and added another 149 through the air.  Terran Limuel had six carries for 63 yards, while Andy Castillo had 62 yards from eight touches.  Stephens-Deary finished the night with six receptions for 112 yards.

While Mojo will now enjoy its bye week, the Bobcats will have to travel to Midland Lee for the final week of district games.  One will be tied with Permian, while the other will have to settle with third place.  The Panthers own the tiebreaker over both teams irregardless.  The district bell will once again wear Black ‘N’ White. 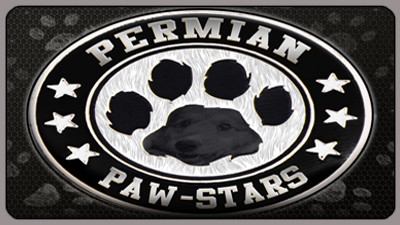