Abilene, TX – The Permian volleyball team found out how Abilene Cooper has remained undefeated in five outings.  The Lady Cougars like to build a lead and keep that lead as Mojo fell (18-25, 16-25, 25-21, 27-29) in four sets on Friday in the Cougar Gym. 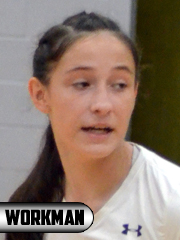 After dropping the first two sets, the Lady Panthers found their rhythm and won the third set 25-21.  It was the first time all season that an opponent had even won a set without getting swept by Cooper.  Mojo backed up the performance of the third set with tough fought fourth.  The Coogs eventually won the set, but it would take extended play before winning 29-27.

Jade Workman led Permian with 11 kills, followed by Bethani Fierro and Nyxalee Munoz with 10 kills each. Denali Cardenas led in team assists with 20, while Workman contributed 15.

Cianna Harris, Monica Hinojos, Workman, and Fierro were each credited with a block.

The district run begins next Tuesday, when Permian will host Abilene High at the PHS Fieldhouse.