Wolfforth, TX – The Panthers were finally able to complete the district slate of games this afternoon in the Hub City. Permian had opportunities to secure the win, but came up short to Frenship 48-45 in the Tiger Pit. 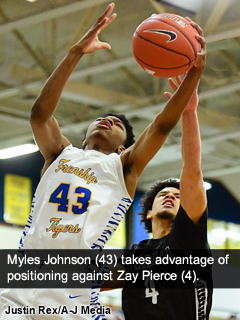 It took a half for both teams to shake off the rust of being forced off of the court due to the inclement weather that plagued Texas this past week.  Sub-freezing temps in single digits dictated a total of eight days that had passed since a organized workout had been held.

According to head coach Tim Thomas, “It was a tough one today. We got in foul trouble, and made some mistakes out of rhythm.  Sure we’re disappointed that we came up short, but it was a great high school game. We will try to learn from this experience and prepare for the first round of playoffs in a very quick turnaround.”

While the district’s two best struggled through the first half, Frenship utilized the opening frame to take a 12-7 lead.  Permian responded in the second stanza and narrowed the deficit to a single point at the break.  Shy Deary accounted for nine of the 12 Mojo points in the quarter, with Calvione Calicutt scoring the remaining three.  The Tigers owned the 20-19 halftime edge.

Frenship came out in the third quarter and reestablished its lead by as much as eight points. Midway into the period, the Black Cats rode a pair of treys and a basket by Deary to position themselves into taking control of the momentum.  Calicutt and Cedric Baty each added a bucket to push Permian to a 34-33 lead.  It was the first lead since the 5-4 advantage early in the opening frame.  Deary capped off the scoring with another bucket to give the visiting cats a 36-33 lead to end the third.

The Tigers led off the final eight minutes going on a 7-0 run to regain a lead they would not relinquish.  A back-and-forth exchange of possessions ensued.  Many of those exchanges resulted in turnovers and missed shots as the clock ticked away precious seconds.  Frenship sat on a 41-40 lead with a little over a minute to play.  The free throw line became the center of focus.  The Panthers made 72 percent from the line, which bettered Frenship’s 65 percent.

The Tigers distanced themselves into a two-possession lead before Deary dropped a three-pointer through the cylinder with 18 ticks to go.  Ahead 47-45, Frenship made one of two free throw attempts.  Trailing by three points with :02 on the clock, Permian in-bounded the ball near mid-court.  Deary was recipient of the pass and fired a shot within range but just wouldn’t fall.

Deary led all scorers with 28 points, which included three perimeter three’s.  The Mojo Machine defensively recorded five steals in the losing effort. Calicutt led Permian in rebounds with eight, while Race Herr registered three blocks. The Panthers and Tigers were even in assists with seven each, and both only made a meek 29 percent of their shot attempts.

The Mojo Machine will immediately turn its attention toward the second season.  Permian is likely to play three playoff games back-to-back-to-back next week in a true test of grit.  The Panthers will host El Paso Eastlake in the Bi-District Round of the Class 6A state playoffs on Monday in the Permian Fieldhouse.  Tip is slated for 5:00 p.m.  The Area Round game is scheduled for February 24-25, with Regional Quarterfinals rounding out the week on February 26-27.