Odessa, TX – While Permian is still looking for some time to get a couple of workouts in, the Panthers were able to get past a scrappy El Paso Eastlake team to advance in the Class 6A state playoffs.  After buffering a 31-15 halftime lead, the Black Cats claimed the Bi-District win by handing the Falcons a 71-58 decision in the PHS Fieldhouse on Monday evening. 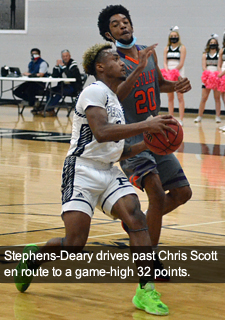 Permian relied on its roots and went back to the basics of executing a smothering, stingy defense while turning Shy Stephens-Deary loose on the other end of the court.  He would unleash an impressive 32-point effort.  Race Herr backed that up with another 14 points and Tremayne Baty donated 12.  Deary also led in rebounds with six, and Herr followed with five.  Baty had three of the 10 steals registered by the defense.

While the Mojo Machine looked to occasionally have moments of misfiring, the Panthers got back to their winning ways.  Head coach Tim Thomas put it in perspective, “It’s always great to win in the playoffs. We’re still trying to get our rhythm back after not practicing during the seven day winter storm. I’m proud of the kids for winning our sixth consecutive Bi-District championship.”

Permian provided a solution to the sluggish first half displayed in Saturday’s district finale by slapping 20 first quarter points on the board.  Eastlake could only come up with nine.

The Black Cats would hold the Falcons to another quarter of single-digit scoring.  While Eastlake was held six second quarter points, Baty matched that alone as Permian extended its lead to 31-15 at the intermission.

Both teams put forth their best efforts in the second half.  While many of the district opponents this season have had difficulty recovering from the halftime deficit, the Falcons refused to buckle and were able to keep pace with the Panthers in the third and fourth quarters.  The Mojo Machine found success hammering down treys in the third frame.  Stephens-Deary dropped a pair of three’s while Herr and Zay Pierce each added another to produce an 18-point period.  Baty contributed a couple of buckets to push the lead to 49-35.

Still the Falcons wouldn’t go away.  They would trim the difference down to 11 points before Permian asserted itself and never allowed Eastlake to get any closer.  The visiting Falcons were forced to resort to fouls and free throws, but Deary and the Panthers would endure that strategy for a 71-58 playoff opening round victory.

The Mojo Machine will meet North Crowley in a battle of Panthers on Wednesday at Clyde High School in the Area Round of the Class 6A state playoffs.  Tip is slated for 6:30 p.m.  It took overtime for North Crowley to put away Keller Central, 50-45 tonight.  The Regional Quarterfinal game will cap-off the week with one of the Panthers playing the winner of Byron Nelson vs Abilene High on February 26-27.