San Angelo, TX – Second half goals would benefit the unbeaten Permian girls and San Angelo Central boys on a hazy, dreary evening in District 2-6A action this evening. 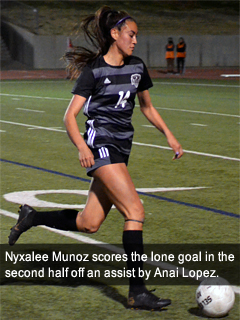 The Panthers and Bobcats dealt with two reschedulings and change of venues before meeting in the district clash.  Originally to be played in San Angelo on Tuesday, city water issues forced the change to Odessa.  After having difficulty lining up officials, the combatants were finally able to meet this evening back in San Angelo.

The Permian and Central boys were first to take the field.  In a tough fought exchange, neither team could get a shot to split the pipes.  That would change when Aaron Hernandez converted a free kick with 13 minutes remaining in the first half.  The 1-0 Mojo advantage held into the intermission.

The Bobcats pulled even midway through the second half on a penalty kick by Dylan Caudle to knot the match at 1-1.  The score was left unblemished through the remainder of regulation.

Each team will add to its district tally, which now both sit at four points.  Permian’s record sits at 1-2-2, while Central is 1-1-2 in district play.
.

The varsity girls followed, which paired the unbeaten Lady Panthers against the second-place Central Lady Cats.  Permian entered the contest fresh off of a 3-1 win over Midland High, which included a two-goal second-half surge to break a halftime tie.

Defense limited scoring opportunities by both clubs throughout the match.  After the first 40 minutes of play, the affair remained scoreless and deadlocked.  The Lady Panthers would again rely on a second half surge to secure the victory.  Mojo’s Nyxalee Munoz took the spotlight and scored the game’s only goal with an assist by Anai Lopez to claim the 1-0 decision.

With the road win, Permian (4-0-1) remains in first-place while Central (2-1-1) suffers its first district loss.  The boys and girls junior varsity squads had to sit this one out as their matches were canceled.  Weather permitting, Permian is set to host Midland Lee at Ratliff Stadium next Tuesday, February 16.