Odessa, TX – The Mojo Machine closed out the final district home stand with a 54-38 victory over Abilene High.  While the Panthers took care of the task at hand, it was a night that offered much more than just the game. 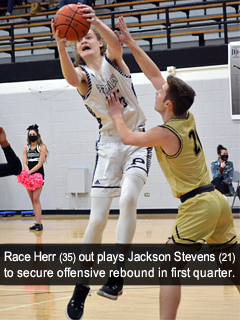 According to head coach Tim Thomas, “It’s always great to win your last home district game. Especially with all the things going on – Senior Night and Honoring Hayden – that could be a distraction. The kids played with grit in what was a gritty/tough game.”

Back in August of 2017, then 14-year-old Hayden Muschalek passed away from injuries sustained in a car accident.  The Permian basketball team, many of which were classmates of Muschalek, honored his memory tonight and had shirts printed with “Gone But Never Forgotten” on the front and “#HaydenStrong” on the back.  He would be graduating this year and in all likelihood a member of this team.

It was also Senior Night featuring Carlous Davis, Kyson Moreno, Zay Pierce, and Shy Stephens-Deary.  Deary took advantage of that spotlight by leading all scorers with 17 points for the night, and sophomore Race Herr backed that up with another 13.

In a low-scoring opening quarter, the Panthers worked through a sluggish start and paced themselves with an 8-0 run.  The Eagles found a groove late in the quarter and were able to get on the scoreboard with a perimeter three with 2:04 remaining.  They followed that with a pair of baskets to narrow the deficit to one as Permian scoring went silent.

The Panthers were able to crank it up in the second frame, adding 17 points while limiting Abilene High to four points en route to a 25-11 advantage at the intermission. While it looked more like the “Rev It Up” team of the past several weeks, the Mojo Machine just wasn’t firing on all cylinders.

The Eagles came out in the third quarter and made three treys to try to keep pace with the Black Cats, but Permian was have no part of that plan and posted another 13 points to its tally to extend the lead to 38-22.  Herr was dominating the glass and recorded 10 rebounds, which helped in controlling the Abilene scoring opportunities.

The final eight minutes consisted in several missed shots and an even exchange when buckets would fall.  Stephens-Deary also finished the winning effort leading in assists as Permian claimed the 54-38 win.
Hayden, this one was for you.

With just one district game to go before taking on the second season and the state playoffs, the Mojo Machine (10-1, 18-4) will now make the trek north to the Hub City for the much anticipated date with Frenship (11-0, 20-4) at the Tiger Pit in Wolfforth.  On the line… the District 2-6A title.
#MojoMachine #RevItUp #HaydenStrong