Midland, TX – Scoring remained low while emotions ran high in Tuesday’s District 2-6A clash between Permian and Midland Legacy.  The Panthers picked up a 39-37 victory over the Rebels to stay even with OHS in the district standings. 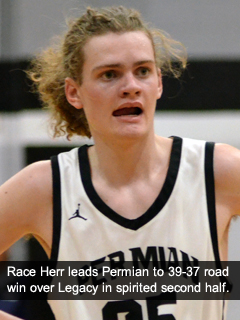 The contest came complete with a shoving match late in the third quarter.  The altercation brought a stoppage in play and delay to settle the fans and players back into order.  Four ejections would follow – two from each squad, but it wouldn’t deter the Mojo Machine from taking care of business.

The game’s opening sequence featured an alley-oop from sophomore guard Ben Saldivar to junior Race Herr for a slam dunk and first two points of the game.  It worked so well and brought such fire that the pair would do it again to ignite an eight-point run by the Panthers.

After an exchange of baskets, the Rebels went on an eight-point run of their own to narrow the deficit to one at 11-10 to end the first quarter.  Strong defenses and missed buckets ushered in single-digit scoring for Legacy and Permian in the second frame, sending the teams to their respective locker rooms with the Black Cats owning a 19-16 advantage.

Each team would add another 10 points to the scoreboard in the third period.  Herr and Saldivar each knocked down a three, while Jamibrione Anderson added a basket and two free throws for another four points.  With 1:28 on the third quarter clock, the heated exchange halted action which began with Saldivar’s ankle being held and excessive shove that followed from the same player.  When play resumed, Herr drained a trey from the left perimeter to give Permian a 29-26 edge to close out scoring in the quarter.

Herr added another trey and Tremayne Baty made four clutch free throws to give the Panthers a 39-35 lead with just over 30 seconds to play in regulation.  Legacy got a basket to fall with 0:26 on the clock to pull to within two, but Permian prevented any last second heroics by the Rebels for the 39-37 final.

Herr finished the evening with a team-high 11 points.  The Mojo Machine led in rebounds and assists, as well as recording four steals and seven blocks.  The Black Cats made 82 percent of their free throws in the victory.

With two games remaining for District 2-6A teams, Frenship (9-1), Permian (7-3), Odessa High (7-3), and San Angelo Central (6-4) will begin their state playoff runs in two weeks.  Seeding is still up in the air.  The Panthers will once again be traveling east on Friday, this time in a road trip to Abilene High. Tip-off is scheduled for 7:30 p.m.