Odessa, TX – As Permian gains momentum through the second half of district, the Panthers dished out a 75-57 decision to San Angelo Central at the PHS Fieldhouse on Tuesday night. 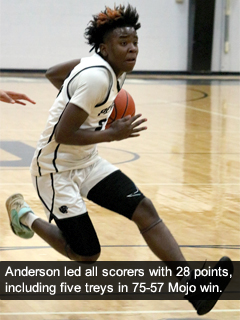 While the Mojo Machine was dealt a 51-43 loss in the first meeting in San Angelo, it was all Permian from the opening tip this evening. Jamibrione Anderson led the Panthers with 28 points, which included five treys. Ben Saldivar followed with 15. Mojo knocked down 10 three-pointers and made 57 percent of its shots.

A marked difference from the first meeting, Permian head coach Steven Flores attributed the improvement to better quality shot selection and the reduction of costly turnovers. “The big difference in our two games, to me, was the turnovers. We limited our turnovers and we shot the ball well. If we can do those two things consistently, I think we can be a hard team to beat.”

Along with the Panthers gaining confidence, Flores echoed the sentiment, “Our kids were focused and played with intensity, and I really enjoyed seeing that. We’re starting to really gel together out on the court.”

The Bobcats trailed from the very beginning as the Panthers established themselves early. Tremayne Baty knocked down three baskets to assist in Mojo taking a 19-11 first quarter lead. Central’s top-scorer Branden Campbell was held to four points in the opening period, only to finish the game with 19 points in the loss. It would be business-as-usual for Permian in the second stanza as the Black Cats buffered a 39-25 lead at the intermission.

After the break, the Mojo Machine continued to inject its stingy defense on one end of the court – recording five steals and a pair of blocked shots. On the other end, Permian added an additional 17 points to its tally with 10 coming from Anderson. The Panthers enjoyed a comfortable 56-37 advantage by the end of the third quarter.

San Angelo Central had its best offensive output in the final frame. The Bobcats outscored the Panthers by four points (23-19), but that was well short of closing the deficit that separated the two. Permian added a mark to their win column with a 75-57 district victory.

Permian (6-3) will travel to Midland next Tuesday to face Legacy (4-5) in another district rematch. Tip-off is scheduled for 7:30 p.m. The Bobcats and Rebels are slated for this Friday at 7:30.