Odessa, TX – The Mojo soccer teams hosted San Angelo Central in a district match-up on Tuesday that resulted in a one-goal win for the boys and one-goal loss for the girls at Ratliff Stadium. 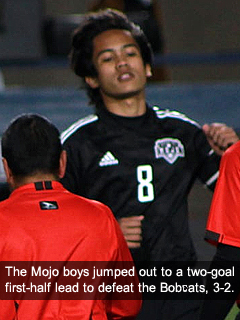 For the boys’ nightcap, the Bobcats found themselves in a hole early and were never able to claw their way out.  Just four minutes into the match, junior Damian Gonzales found the back of the net for an early Mojo lead.  Adrian Martinez, also a junior, setup the score by piercing through the San Angelo defense for the 1-0 lead.

Permian continued the pressure and pushed the deficit to a two-goal advantage when senior captain Amari Everage hammered a free kick past the Central goalkeep for a 2-0 lead midway into the opening half.  The Panthers drove down the field on two more scoring threats but were unable to cash in and had to settle with the 2-0 lead at intermission.

The Bobcats managed to score bookend goals in the second half, but the Panthers got back in the win column with a 3-2 decision.  Sophomore Jacob Franco gathered in a pass and sent the shot between the posts for Permian’s third goal midway into the half.

BATTLE OF DISTRICT UNBEATENS
In the early match, the Lady Panthers played hosts to the Lady Cats in a highly anticipated meeting.  Both entered the contest with intentions of remaining atop the district standings and didn’t disappoint.   The battling cats provided plenty of defense by keeping the possessions contained between the 30 yard lines most of the evening.

Permian drew first blood midway in the first half when Nyxalee Munoz sent a rocket into the net from long range.  That lone goal would sustain the 1-0 Mojo lead into the break.  She had another opportunity to extend that lead just before the half, but the shot sailed just outside the post.

Central found a groove and rode it five minutes into the second stanza.  A 25-yarder made its way into the net to knot the contest at 1-1.  After a back-and-forth battle that lasted past the midway point, the visiting Lady Cats found a crease and launched another extended shot that flew just under the crossbar for the go-ahead goal.

The Lady Panthers gave a valiant effort in response, but San Angelo was successful in chewing up the remaining 10 minutes of clock.  The Permian girls suffered their first district loss of the season.

The Mojo soccer teams will return to action next Tuesday, February 15, as they visit Midland Legacy to complete the first set of District 2-6A matches. The Lady Panthers will kick things off at 5:30 p.m. and the Permian guys will follow at 7:30 p.m. at Grande Communications Stadium.