Abilene, TX – Permian ran into an Abilene team that offered one of their best efforts of the season. The Panthers endured to defeat Abilene High 68-56 at the Eagle Gym on Friday night. 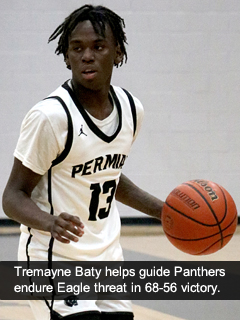 It would take a strong third quarter for Mojo to get the upper hand in the second half.  Riding on guards Ben Saldivar and Tremayne Baty, Permian extended a narrow two-point halftime lead for the District 2-6A win.  Saldivar led the Panthers with 20 points and Baty backed that with 19.

Abilene High took full advantage of Senior Night, opening the contest with an early lead to the satisfaction of the home faithful.  A total of 18 treys would rattle the cylinder for both squads, with the Eagles donating four in first quarter.  Abilene High buffered a 9-4 edge before Race Herr made a basket and Baty added two more for Mojo to possess a 15-13 lead.

With each team adding 14 points in the second period, Permian maintained the narrow two-point deficit at 27-25.  Six different Panthers contributed to the tally, including a pair of perimeter three’s from Herr and another from sophomore guard Tabari Jones.

After Permian made a few adjustments during the intermission, things started to return to form for the Mojo Machine.  While Abilene refused to buckle, Saldivar and Baty pushed the tempo in the third stanza.  A pair of treys from Saldivar, and dual buckets from Baty and Calvione Calicutt had the hosting Eagles watch their hopes of a final home game victory start to fade.  By quarter’s end, the Panthers had finally established a 49-39 lead with one quarter to play.

Making their attempts to recapture a lead, the Eagles tried to quicken the tempo to generate a scoring surge.  Each time the hosts would try, the Panthers met that challenge with matched energy.   In an intense exchange,  the Black Cats forced Abilene High into a desperate unleashing of multiple long-range three-ball attempts.

With time waning, the Eagles started racking up fouls in an effort to preserve clock down the stretch.  That would prove costly as Baty spent bonus time tickling the net with consecutive made free throws.  Abilene’s best just wasn’t enough with Mojo claiming the 68-56 win.

The Panthers finished the night with 14 steals and a pair of blocks on defense while offensively shooting 44 percent from the field.  Permian (8-3, 24-7) will next host Frenship (10-1, 28-3) on Black Tuesday for the highly anticipated rematch… the District 2-6A finale.  Tip is set for 7:30 p.m. and the PHS Fieldhouse will be at capacity.

Odessa High (8-3, 24-7) defeated Midland High tonight for the Bronchos and Panthers to remain deadlocked in the district standings in second place.  OHS will venture into the Concho Valley on Tuesday to face San Angelo Central (6-5, 20-10).