Lubbock, TX – The Permian softball team opened the 2022 season in dominating fashion, ripping through Lubbock High 20-0 in five innings on Tuesday evening in the Hub City. 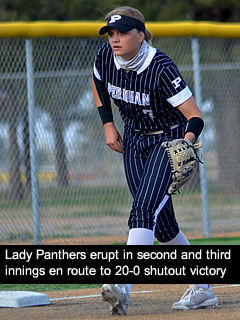 The non-district meeting featured the Lady Panthers slapping ten runs on the board in the second inning.  Permian opened the contest with Taylor Ramirez belting out a lead-off double.  Tiggy Rayos followed with a sacrifice grounder to the infield to plate Ramirez for a 1-0 first inning lead.

Alexis Belen recorded her first three of seven strikeouts in the bottom of the opening frame.  Belen would go three innings in the circle, with Anaya Parades finishing the last two.

Sparks would fly in the top of the second frame with Mojo adding ten runs, and eight more in the third.  After Belen and Anyssa Cruz singled to get on base, Madi Garcia hammered out a two-out, two-run RBI double to centerfield.  That would green light three consecutive doubles from Rayos, Makayla Sanchez, and Illiana Garcia to blow the game open.  Lubbock High would initiate a pitching change, but Mojo continued to roll.  Walks and hit batters would follow.  The Lady Panthers sat on a 11-0 lead after just two innings.

After retiring the Lady Westerners in order to close the second inning, Permian was back at it.  This time racking up eight more runs in the third.  More base-on-balls and hit batters would load the bases, setting up another Mojo surge.  Ramirez would clear the bases with a hard hit triple to left centerfield.  The Lady Panthers continued to preserve the shutout in the bottom of the inning.  After reaching base on a walk, Lubbock High would hit into a double play.  Belen struck out the next victim as Mojo enjoyed a 19-0 lead.

Permian suffered its first hitless inning in the top of the fourth, but the host Lady Westerners had no answer in the bottom half.  The Lady Panthers added another run in the top of the fifth.  After singling to right field, Cruz advanced to second base on a bunt by Madi Garcia.  She would steal third and score on a sacrifice fly by Ramirez to cap scoring in the lopsided affair.  Parades issued a pair of strikeouts and forced a ground out to first base to bring the game to a halt.

Garcia finished the evening going two-for-three at the plate behind a pair of doubles, while Sanchez was also two-for-three with a double and single.  Ramirez had the triple and a double in the victory.  Cruz was perfect at the plate, donating a pair of base hits while drawing two free trips to first base.

Completing the road trip sweep, the Mojo junior varsity claimed an 8-3 victory in the early game.  Permian will make a return trip to the Hub City later this week for the Lubbock ISD Softball Tournament to be held February 17-19.