Odessa, TX – Going into the evening, Permian wanted to accomplish two things – capture at least a share of District 2-6A title (for the girls) and secure a playoff spot (for the boys) with wins.  San Angelo Central had other plans as the teams took the field at the Ratliff Sports Complex. 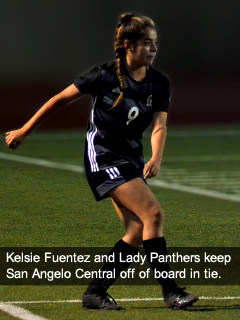 As the West Texas Relays winded down inside the stadium, soccer matches were forced to the south fields.  Junior varsity headed to the grass field, while the varsity stepped on the turf field.

The much anticipated catfight showdown provided plenty of excitement, while the scoreboard remained unblemished after 80 minutes of play.  Both Permian and Central had chances but just couldn’t break the deadlock.

Defense ruled the second half.  Permian made a late charge in the waning moments of the match, but the kick sailed over the crossbar for the 0-0 tie.

As a result, each team adds a point to their district tally.  The Lady Panthers have 18 district points and own a 7-0-4 record. The Lady Cats have 16 points and are currently 7-1-2.  Permian has one match left, and San Angelo has two remaining. Mojo can still clinch at least a share of the district title on March 16 against Midland Lee at Grande Stadium.  A tie or loss by Central would green light an outright title for Permian.

In the early match, five goals were collected between the Panthers and Bobcats, with Central possessing the one goal advantage in the 3-2 Mojo loss.  It took all of three minutes for the Bobcats to strike first for a 1-0 lead.  Amari Everage nailed a free kick to even the match with 14 minutes left in the first half.  The knotted score would hold into the intermission.

Another early goal to start the half would again give Central the lead.  The free kick got partially deflected, but still slipped inside the pipe just 1:48 into the half.  The Bobcats increased the deficit to 3-1 midway in the second half. Cristian Acevedo responded with a goal of his own immediately following the San Angelo goal.

The Panthers ran out of time and were unable to even the contest.  Odessa High won 4-1 over Abilene tonight to leap frog over Panthers into the fourth spot in the 2-6A standings with 10 points. Permian has 9 points with both having just one game remaining on the district schedule.