Odessa, TX – Coming off of a convincing win over Frenship, the Permian girls met Midland Lee at Ratliff Stadium in a make-up match from the arctic blast week. The Lady Panthers remain unbeaten after battling to a scoreless draw. The Mojo boys picked up two points in the District 2-6A standings with a 2-1 decision over the Rebels. 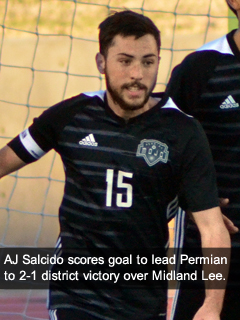 The guys were first to take the field. Looking to redeem themselves from Tuesday’s loss, Permian was able to put the match away with a late goal to secure the win.  With under two minutes remaining, senior AJ Salcido came up the game-winner when he found the back of the net with just 1:43 left.

Midland Lee had taken an early 1-0 lead on a penalty kick midway into the first half.  It held the remainder of the half and into intermission.  The Panthers evened the match when they converted their own penalty kick goal midway in the second half. Aaron Hernandez, also a senior, punched it in at the 15 minute mark.  That set up the Salcido goal for the victory.

The Panthers improve their record to 6-6-2 for the season, and 2-3-2 in district play.  Permian has now accumulated six points in the standings, as the teams have now reached the halfway point of the district slate of games.  Tomorrow’s match with Odessa High will conclude the three-game week for Mojo.

The girls had the night cap and an undefeated record was on the line for the Lady Panthers. In a defensive battle between 2-6A rivals, neither of the teams were able to collect a goal. After 80 minutes of hard fought play, Permian and Lee had to settle with a scoreless draw.

Most of the contest was spent on the Lee end of the field.  Mojo had the clear advantage and limited the Lady Rebels to only a couple of shots on goal with a smothering defense.  Permian had opportunities from multiple trips around the box, but just couldn’t get any of the shots to land between the pipes.

The Lady Panthers have gathered up 12 district points and own an impressive 9-0-3 record. The PHS ladies are sporting a 5-0-2 district mark with five matches remaining on the district schedule.

Permian will return to Ratliff Stadium tomorrow evening for a crosstown showdown with the Bronchos. The guys are slated for a 5:30 start and the ladies will follow at 7:30. Odessa High boys won the first game against the Panthers and are ahead by one point in the district standings. The Lady Panthers will be protecting their unbeaten season and hoping to stay atop the district with a win.  The Mojo girls beat OHS earlier this season.