Odessa, TX – It was a night that just wasn’t Odessa High’s night.  A full moon added to the Mojo mystique as the Permian girls shutout their crosstown rivals.  The Bronchos watched the Mojo boys squash a two-goal deficit to end deadlocked at Ratliff Stadium on Friday to close out a three game week. 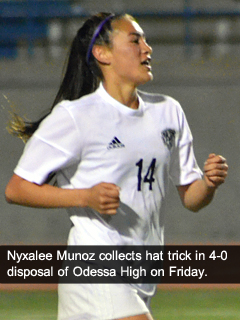 In the early match, the Odessa High boys team took advantage of miscues and converted them into goals.  The Bronchos scored their first just three minutes into the match.  They would come back for their second on a clean up shot at the 13th minute for 2-0 lead.

Down by two, Permian’s Cristian Acevedo converted a penalty kick less than two minutes later to cut the deficit in half.  It would be short lived as the Bronchos reestablished a two-goal lead by pushing a deflected shot into the back of the net in the 39th minute.  Odessa High would take the 3-1 advantage into intermission.

The Panthers did a good job of resetting during the break and came out more assertive in the second half.  Mojo stepped up the defense and denied any serious scoring threats down the stretch as momentum began to shift.  On the other end of the turf, junior Amari Everage dribbled a shot between the pipes in the 56th minute to narrow the difference to one.

As time was running low, Permian scored the crucial equalizing goal. Aaron Hernandez successfully headed a teardrop kick past the goalkeeper with just 51 seconds left on the clock to force a 3-3 draw.  Each team will add a point to their district tally.  The Panthers are now 6-6-3 for the season, and 2-3-3 in district play.  Permian has accumulated seven points in the standings and sits in fourth place, two points behind Frenship and San Angelo Central.

The Mojo girls are still rocking along and continued their undefeated streak in the night game.  Nyxalee Munoz turned in another solid performance, recording a hat trick and giving the Lady Bronchos all they could have ever wanted in the 4-0 Mojo shutout win.

Permian wasted no time in taking charge of the match.  Munoz collected her first goal off an assist from Anai Lopez in the 11th minute. About a minute later, Lopez added a goal of her own when the goalkeeper failed to clear the ball out from in front of the goal line.  Lopez’s putback gave the Lady Panther a quick 2-0 lead.

Permian extended the lead to 3-0 in the 33rd minute.  Munoz worked past two defenders and punched it in from the right side of the net for her second goal.  The Lady Panthers would take the three-goal lead into the break.  Munoz had the lone score of the second half, added her third goal in the 46th minute to cap-off the dominating 4-0 win.

The Lady Panthers have amassed 14 district points and own a 10-0-3 record. The PHS ladies are sporting a 6-0-2 district mark with four matches remaining on the district schedule.  The Lady Bobcats from San Angelo have 13 points and are currently 6-1-1.

To conclude the arctic weather make-up slate, Permian will once again face a three-game week on March 1, 2, and 5 next week.  Mojo will host Abilene High at Ratliff Stadium on Monday and then travel to Grande to face Midland High on Tuesday.

The week will be capped on Friday with San Angelo Central.  This time the much anticipated district clash will be played at Ratliff Stadium.  The Lady Panthers utilized a Munoz goal in the second half on February 10 to hand Central their lone district loss to date.  Both the Permian boys and girls teams can benefit from sweeping and collecting wins on Friday.