Odessa, TX – Going into the District 2-6A volleyball showdown, Permian and San Angelo Central faced the reality that one would be securing a playoff spot while the other would be heading to basketball season.  In a three-set sweep (25-19, 26-24, 25-20), the Lady Panthers came out on top at the PHS Fieldhouse on Friday afternoon. 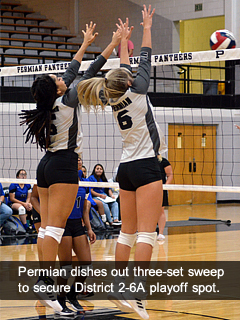 Prior to the contest, both the Lady Panthers and Lady Cats possessed matching district records and would be battling for the fourth spot in the 2-6A standings.  Due to Permian defeating Central in the earlier meeting on September 28, Mojo holds the edge in any tiebreaker scenario for the final playoff spot.  Win and we’re in.  Lose and let the quagmire begin.

Several key blocks at the net kept the Lady Cats in the game, but the Lady Panthers  proved to have too much firepower for the visitors to overcome.  In the opening set, the combatants remained even from 7-6 to 19-19.  That’s when Permian gained the advantage.  Fueled behind Iliana Garcia’s serving abilities, Mojo went on a six-point run (including a Garcia ace) to take the set 25-19.

The second set would also be a duel.  Permian gained the first breakaway with the score 6-4.  Garcia would again lead the Mojo surge with three consecutive serving points for a 9-4 edge.

Cianna Harris pushed the lead to 12-5 before Central mounted a response.  The Lady Cats were able to cut the deficit to two at 17-15, and then go on a four-point run to take a 20-18 lead.  After knotting the set at 20-20, the two teams exchanged leads to match point.  Jade Workman hammered a vicious spike into open space for the Lady Panthers to come away with a 26-24 second set win.

Leading two sets to none, Anyssa Cruz gave Permian a slight 6-4 lead with three consecutive points in the third set.  Workman stepped to the line and ushered in a six-point Mojo surge to extend the lead to 13-5.  The Lady Cats managed to stay close and chipped away at the lead, but could never get closer than a two-point difference.  In possession of a 24-20 lead, the Lady Panthers closed the deal when Nyxalee Munoz collected the final dig for the 25-20 victory.

Mission accomplished as Permian secured the three-game sweep of the match, and more importantly, now owns the tiebreaker over San Angelo with the second win over the Lady Cats this season.  The Lady Panthers (5-6, 28-14) will host Frenship (9-2, 23-15) on Tuesday, October 26 in the district finale at the Permian Fieldhouse.  The junior varsity will take the court at 5:00 p.m. with the varsity taking over at 6:00 p.m.