Odessa, TX – The Permian baseball team has spent the last three days competing in the annual Tournament of Champions.  The Panthers opened with a win over Lubbock Monterey on Thursday, and rallied back with 13 runs to take the decision away from Andrews in the tourney finale on Saturday.

The Black Cats opened the tournament with a highly contested meeting against the Plainsmen.  After battling to a 3-3 tie through four innings, Mojo turned it up a notch in the fifth.  Monterey gained a one-run advantage in the top of the fifth, but Permian responded with three of their own.  Back-to-back RBI triples from Xavier Melendez and Gus McKay pushed the Mojo lead to 6-4.  The Plainsmen collected a run in the seventh but still came up a run short.

Friday featured a pair of close games against Canyon Randall and El Paso Pebble Hills.  In the morning contest, the Raiders utilized a three-run fifth to edge the Panthers by a tally of 6-4.  After a short break, Permian returned to Momentum Bank Ballpark for a competitive ballgame with the Spartans.

Caleb Boswell got the Panthers on the board with an RBI single in the opening frame.  After two scoreless innings, Permian was back for more.  A pair of sacrifice flies from Bryson Baer and Cooper Golden plated two more runs for a 3-0 lead through four innings.

Boswell hammered a shot over the left field fence in the top of the fifth stanza to give Mojo a four-run buffer.  Pebble Hills managed to cut the deficit to 4-3 in the bottom half.  An RBI single from Hayden Ramage gave Permian some breathing room as the Black Cats took a 5-3 lead.  In one last surge, the Spartans utilized a lead-off single, walk, and fielding error to fill the bases with one out in the bottom of the seventh. A chopper down the third base line was fielded by Boswell, where he stepped on the bag for the force out.  A bullet throw to first base beat the runner to complete the double-play and end the game.

The final day of the tourney would again produce a split of games for the Panthers.  The morning run in with Weatherford quickly became a pitchers duel and battle at the plate.  Between the two pitching staffs, 15 batters were sent back to the dugouts after being issued strikeouts.  The Kangaroos caught a break in the fourth inning and converted three doubles, a base hit, and a walk into four runs.  Permian got on the scoreboard in the bottom of the sixth, but Weatherford matched that with a run in the seventh to hand the Panthers a 5-1 loss.

After playing four tournament games in Midland, Permian was more than happy to return to the comfortable confines of McCanlies Field.  The Panthers would host Andrews in the finale.  The Mustangs came out swinging to establish their immediate intent.  Belting out three doubles and a triple, Andrews recorded a quick five runs in its first at-bat.  Permian took its turn and got two of those runs back on an RBI single by Callan Warren.  The Mustangs sent three more runs across the plate in the top of the second for an 8-2 lead, but Mojo again answered.  With runners on first and second, McKay ripped a shot to left centerfield for an RBI triple to plate two runs.

Andrews remained relentless in the third, racking up three more runs off of three hits and two free trips to first.  The Black Cats were retired in the bottom half of the frame to now trail by a tally of 11-4.  The fourth inning would yield two more runs as Andrews assumed they were in full control of a 13-4 lopsided affair.  It would prove to be the calm before the storm of what lie ahead. 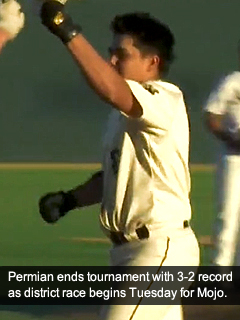 After taking the field and logging a lead-off strikeout, the Mustangs felt pretty good about how the game had gone thus far.  What they didn’t expect was an opening of Pandora’s Box that would completely turn the game on its head.  Ramage got aboard on a hard hit shot up the middle, and Sebastian Bravo followed with a two-bagger to post runners on second and third base.  Melendez would be next to step into the batter’s box.  It took all of one pitch for the senior third baseman to go yard over the right centerfield fence for a three-run shot to cut the deficit to 13-7.  Warren added an RBI double to narrow the difference to 13-9, but Mojo wasn’t near ready to let up on the assault and rally.

A walk and hit batter would bring another pitcher to the mound.  It would be the third Mustang hurler to face a Panther team that was now on a mission.  The pitching change wouldn’t bother Ramage as he slapped a line drive into centerfield for a double to plate two more runs.  Down by only one, Permian had batted around to earn a second plate appearance in the same inning.  After drawing a walk, Bravo joined Ramage on the bases.  In a repeat performance of his previous at-bat, Melendez tattooed a 2-2 inside fastball that sailed over the left field fence for the Black Cats to have not only made up the nine-run deficit, but to now possess a two-run lead.  Permian would convert a pair of doubles and another hit batter into two more runs to lead 17-13 by the inning’s conclusion.

To start the fifth, Melendez took the hill for the Panthers.  Still filled with the adrenaline of the prior batting frenzy, Mojo would force two ground outs and an infield pop-up.  It would be the first scoreless inning for Andrews all afternoon.  With the time limit looming, Permian added a bonus run courtesy of two walks, a hit batter, and a base hit.  As time was called, the Black Cats had managed to load the bases with one out… and an 18-13 come-from-behind victory.  They finished the three-day event with a 3-2 record, while Canyon Randall won the tournament title with a perfect 5-0 mark.

Permian will now turn its focus to the “real games” as the District 2-6A action gets underway next Tuesday.  The Panthers will travel to Abilene for a district date with the Eagles at Blackburn Field.  First pitch is slated for 5:00 p.m.