Odessa, TX – Karma raised its head in the second Permian vs Odessa High crosstown showdown, this time at the OHS Fieldhouse. With ice in his veins, Ben Saldivar drained a basket with nine seconds to play for the Panthers to claim a 36-35 district win over the Bronchos. 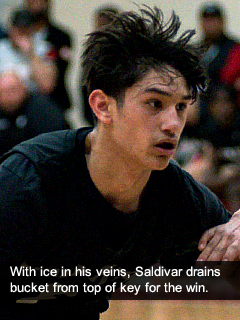 In the first meeting between the two teams, OHS made a buzzer-beating put-back goal to escape the Permian Fieldhouse with a win in the district opener. This time around, it was Mojo with the late bucket to nab the victory in the visitor’s gym. Tuesday’s games across the district kicked off the second half of 2-6A play.

Saldivar finished the night with 13 points, while Jamibrione Anderson backed that up with 12. Both are sophomores for the young Panthers. The low-scoring affair resulted in another classic battle between Mojo and OHS, where defense dictated most of the game.

Permian opened the contest with the first six points at the hands of Saldivar and Anderson. After an exchange of baskets, Odessa High managed to close out the first eight-minute period with a pair of goals to trail the Black Cats by one at 7-6.

Saldivar opened the second frame with two more buckets and Anderson added another one to push the Mojo lead to 13-6. Strong defense by each squad limited scoring to a single basket until late in the second quarter. The Bronchos, led by Coco Rose and Ivan Carreon, found a groove and completed an eight-point run to take their first lead of the ballgame. It would send the two crosstown rivals to the locker rooms with OHS enjoying a 16-13 advantage.

Intense halftime conversations brought focus and realignment to the Black Cats. Calvione Calicutt opened the third stanza with a goal, but Odessa High answered with a trey. In a turning point to the contest, Permian slapped 14 unanswered points on the scoreboard. Anderson started things off with a three-pointer and Calicutt added another goal off of an offensive board.

Regaining a slim 20-19 edge, the Panthers caught fire and continued the surge with three consecutive perimeter three’s as Race Herr, Anderson, and Saldivar each ripped the net to extend the deficit to 29-19 in Mojo’s favor. OHS answered late with two goals, but Saldivar added a bucket to close the third quarter. The Mojo Machine had built an eight-point buffer to lead 31-23.

With pressure squarely on the Bronchos, OHS managed to cut into the Permian lead on a Carreon goal and Rose 3-pointer to narrow the difference to 31-28. Calicutt made a crucial basket and free throw to advance a 34-28 Mojo lead. Back came the Bronchos as the clock counted down, now inside the last minute of play. Rose got a tear-drop 10-footer to fall with 41 ticks remaining to make it 35-34 Odessa High.

Facing time about to run out, the Panthers in-bounded the ball and advanced it past half-court to set up the offense. Looking for a weakness in the Broncho defense, Anderson passed the ball to a soft-defended Saldivar, who drained the jump shot from the top of the key with 9.3 seconds left in regulation.

Similar to the first meeting, OHS pushed the ball up court for one last attempt to steal the game. This time, Permian forced the turnover near mid-court. The Mojo Machine had prevailed with a 36-35 decision. There would be no buzzer-beating loss this time around.

In a return to leaning on its staple stingy defense, Mojo recorded nine steals and six shot blocks for the night. Rose, who exploded with 25 points in the first meeting, was held to 16. Carreon was limited to 10 points.  With Rodney Hall and senior captain Cedric Baty still sidelined, Permian put together a complete game – utilizing a tough defense, taking more quality shots, and handling the ball with better passes. Mojo is showing signs of a mature, seasoned ball club.

The Panthers (4-3, 20-7) will head east on Friday for another District 2-6A meeting with Midland High. In the first contest, Permian had four players scoring double-digit figures in a lopsided affair. The Bulldogs (0-7, 9-17) remain winless in district. Tip is set for 7:30 p.m.