The Mojo baseball program is in its fifth year under head coach Tate Criswell.  He led Permian to a district title this past season.  The Panthers were also Bi-District and Area Round Champions in 2021. 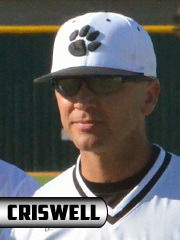 A graduate of Tulia High School, Criswell played quarterback in football and catcher in baseball.  He continued his baseball career at Wayland Baptist University in Plainview (Texas).  There, he received a Bachelor of Science, Exercise Science and Education.

In 2008, Criswell obtained Master of Science and Sports Management at Tech Tech University.  He is currently working on Doctorate degree from United States Sports Academy with Leadership in Coaching and Strength and Conditioning emphasis.

One of Coach Criswell’s goals is to produce productive members of society and teaching life lessons through the game of baseball.

Check out more info on our Baseball program.