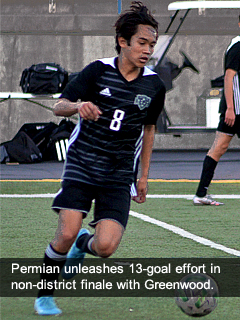 After struggling the past few contests, Mojo entered the meeting looking for a way to produce a more consistent offense. They apparently found the answer as the Panthers wore out the back of the net in a convincing way. After a barrage of goals built an 8-0 lead at intermission, Mojo completed the shutout on a cold night at Ratliff Stadium.

Permian had three players finish the match with multiple goals. Sophomore Johnny Cuellar lead the assault with three, while Chris Soto (sophomore) and Jayden Rubio (junior) added two each. And that only accounted for half of the to scoring.

The Rangers mounted a couple of advances midway into the first half, but failed to put anything between the pipes. Meanwhile, those Mojo fans tough enough to endure the weather were delighted to a bevy of Permian scores on the other end of the field… and that was several times.

After missing an extended amount of time recovering from injury, senior captain Amari Everage contributed a goal of his own in the return. Seniors Alex Ontiveros and Zeke Gardea recorded goals, with juniors Adrian Martinez and Nicolas Ladendorf successfully sending shots past the Greenwood goalkeep as well. Senior captain Noe Rodriguez was also credited with planting a kick into the net in a game completely dominated by Permian.

After competing in three non-district matches and a pair of tournaments in North and Central Texas, the Panthers are now set to begin their slate of District 2-6A matches. Permian will host Abilene High on January 25 in the district home opener at Ratliff Stadium. The Lady Panthers will kick things off at 5:30 p.m. and the Mojo guys will follow at 7:30 p.m.

The boys and girls junior varsity teams will also be playing on the south fields on Tuesday.