El Paso, TX – The Permian boys basketball team made the long trip down Interstate 20 for the opportunity to continue on in the Class 6A playoffs on Tuesday evening in the Margaret Hussmann Gymnasium. 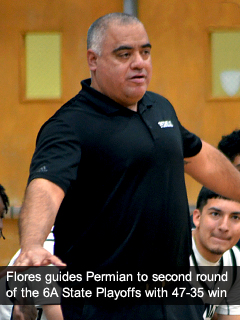 After battling through three close quarters of play, the Panthers were able to secure a 47-35 Bi-District victory over El Paso Franklin with a strong defensive fourth quarter.  The Mojo Machine completely controlled the final stanza, scoring 14 points while limiting the Cougars to a single point.

While many of the state’s high school sports prognosticators cast doubts on Permian’s chances of making post-season play back in the Fall, head coach Steven Flores and his 2022 Panthers (in their “rebuilding season”) will advance to the second round of the state playoffs this coming weekend.

Junior Race Herr led the visiting Black Cats with 14 points, followed by Jamibrione Anderson (13) and Calvione Calicutt (9).  Herr and Calicutt distributed their points in each quarter. Anderson provided his damage in the first half, where he knocked down three treys and a pair of baskets.

Working through a sluggish opening period, Permian sat on an 11-10 advantage.  The usual run-and-gun offensive approach was replaced with a more refined stingy defense.  As a result, Franklin was limited to arid, low-percentage perimeter attempts.  Most of which missed their mark.

The tempo and shot percentage improved in the second frame.  The Cougars were two points better than the Panthers to send the teams into intermission with Franklin now possessing a slim 27-26 edge.  Defense again ruled the next eight minutes following the break.  By quarter’s end, Permian couldn’t overcome the deficit and still trailed by one at 34-33.

The ball began to bounce all in Mojo’s favor down the stretch.  Tremayne Baty opened the fourth quarter with a trey, and Calicutt added a quick bucket and free throw to give Permian a five point lead.  That would draw a timeout from Franklin’s coaching staff.  Seeing the game beginning to slip away, the Cougars hit the panic button and began launching perimeter three-point attempts.  Of which, all of them were way off the mark.

Herr and Calicutt took over the baseline to add four more points.  A transition basket lead to the statement highlight when Herr offered up a big-league power jam with just under a minute to play as the Panthers provided the exclamation mark on the Bi-District victory.

Permian led in all statistical categories – 39-30 in rebounds, 10-8 in steals, 3-1 in blocks, and 41-22 in field goal percentage.  The Mojo Machine (25-8) adds a Gold Ball to the trophy case and will now look for another one on Friday in the 6A Area Round playoff with Keller (26-8).  Abilene Wylie high school will host the game, with the start time still being finalized.

The Indians, winners of District 4-6A, are coming off of a 53-51 emotional come-from-behind victory over Euless Trinity.  Keller loosely resembles the Frenship brand of play and will play a decent four-quarter ball game, with the final eight minutes being their best on the scoreboard.  The Indians are pretty solid at the line, but not so much from the three-point range.