Lubbock, TX – In the final day of the Lubbock ISD First Pitch Classic, the Lady Panthers split two close games to close out the three-day event with a 4-2 tournament record. 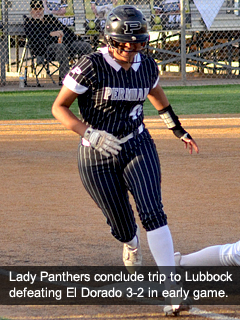 Permian opened the day in a contest that quickly became a pitching and defensive duel.  Sophomore Nyssa Dunn got the start in the circle and limited the Lady Aztecs to two hits and no runs, while striking out eight batters and walking two in her four innings of duty.

After a scoreless inning and a half, it would take Taylor Ramirez’s dinger over the left field fence to break the silence in the bottom of the second frame.  Madi Garcia immediately followed with a hard hit double to continue the attack.  She would advance to third on a ground out and score on a passed ball for a 2-0 Mojo lead.

Pitching ruled the third and fourth innings, where batters were limited to four hits combined.  El Dorado mounted a response in the top of the fifth stanza.  A lead-off single and pair of walks filled the bases to setup an effort that would knot the game at 2-2.  With two outs, a hard hit grounder ricocheted off relief pitcher Anaya Paredes’ shin and into shallow left field as two runners made it across the plate.  A strikeout ended the threat.

The Lady Panthers were retired in order in the bottom of the fifth inning, but Permian returned the favor in the top of the sixth to leave the game still deadlocked.  Facing tournament time limit, Mojo was dealt two quick outs by a ground out and flyout.  Taking control of the game, Anyssa Cruz and Makayla Sanchez answered with back-to-back singles to put two aboard.  With a homerun already under her belt, Ramirez stepped into the batter’s box and ripped a crisp hit shot into open space in the outfield to plate Cruz.  Permian enjoyed being on the winning end of the 3-2 decision.

Thought by several to be the best Lubbock has to offer this season, Monterey utilized a late rally to hand Permian an 8-5 loss at Moegle Field.  The Lady Panthers out hit the Lady Plainsmen 7-6, but finish the tournament with the nail-biting loss.

Monterey drew first blood in the opening frame, aided by the first two batters sending balls over the fence.  Mojo settled in and sat the next three batters down and the battle was on.  The Lady Plainsmen added another run in the bottom of the second, courtesy of a fielding error for a 3-0 lead.

The Lady Black Cats came roaring back in the top of the third inning.  Taylor Ramirez collected a base hit and Anyssa Cruz followed with a two-bagger to right field.  After Mackenzei Bernal drew a walk, the bases were loaded.  Makayla Sanchez stepped to the plate and uncorked a bomb over the right centerfield fence for a one-out grand slam… and 4-3 Mojo lead.  Ramirez added another long-ball blast in the top of the fourth inning to push the lead to 5-3.

The wheels fell off of the cart for the Lady Panthers in the bottom of the fourth.  Monterey placed two runners on base with base hits.  A three-run homerun gave the Lady Plainsmen a 6-5 lead with one out.  Three walks and a hit batter would push another run across, and a passed ball with the bases still loaded gave Monterey an 8-5 lead.

Two singles, a double-play, and a strikeout snuffed out hopes of a Mojo rally in the top of the final inning.  These same Lady Plainsmen defeated district foe Frenship 13-1 on Friday in Wolfforth.  Permian will compete in another tournament next weekend.  The Lady Panthers will be in Midland February 24-26 and will begin the tourney with the Lady Aztecs.